On February 12th, a group of Sayaguesa arrived at the herd in Kloster Lorsch, Hessen (Germany). They number four individuals, three young cows born in 2015 and a one year old bull and are part of the Lorsch-Bielefeld project. The Sayaguesa were imported from the Netherlands and are, unless I am wrong, from the same breeder as those of the Tauros Project and recent imports for the Lippeaue.

The young bull is going to form a new herd together with Hungarian Grey cows expected for summer 2016. The young cows, however, will not partake in breeding until 2017 because of their young age.

As you can see in the news entry of the Auerrind Project's webpage, they are beautiful animals. You can see that the cows are not totally black but have shades of brown instead, some more than others, probably thanks to Alistana-Sanabresa influence. I expect them to become good-looking animals, like their relatives at other locations are. And I am very much looking forward to see the first cross results.
Posted by Daniel Foidl at 11:22 7 comments:

Genealogical trees for some Taurus cattle from the Lippeaue

Using stock lists of the Taurus cattle population in the nature reserve Lippeaue, Germany, of the years 2015, 2013 and 2011 I was able to track down the full genealogy of a number of Taurus individuals to their last un-crossed ancestors. I have been planning to visualize that since a few days after my return from the Lippeaue in 2015 (see here).

Thanks to an extensive photo archive that I was provided by Matthias Scharf from the ABU, I was able to do five complete genealogical tables showing the ancestry of 24 crossbred animals, about the half of which are still present in the herd.
I used the program GIMP to make these tables simply by arranging them in the correct order and putting lines on them, since I don’t know of a program that would be better for visualizing such genealogical trees.

Now I am going to cover the respective trees and give some information on those individuals that have not been covered on the blog here. I have been planning to do a post on older, not formerly presented individuals from the Lippeaue of past years here for a long time, so more information is about to come and I don’t want to give away too much for now.

Mind that similar looking siblings or parents and offspring do not necessarily imply that those traits shared are genetically stable. Just a few animals are way too few to determine the genotype of an individual. Equally, a sibling pair made of a red cow and a black bull does not imply that both inherit a well-marked sexual dimorphism. They are just two possible outcomes of genetically heterogeneous parents.

The breed identity of a pure founding individual is marked with a letter in brackets, H standing for Heck, C for Chianina, S for Sayaguesa and L for Lidia. Only those individuals whose deaths I know for sure have a †. 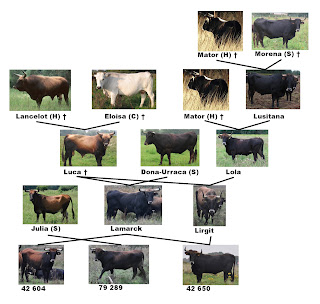 Lancelot was a Heck breeding bull of Neandertal descend (Eiszeitliches Wildgehege Neandertal; a large-horned Heck cattle lineage; almost all founding Heck individuals of the Lippeaue were from the Neandertal). Mator was a Dutch Heck bull imported from Slikken van Flakkee. Both Lusitana and Lola are not present in the herd anymore, but I do not know if they are still alive or dead.
The sisters 42 604 and 79 289 look quite alike, but as I just outlined this does not necessarily imply they are homogeneous for those traits they share. 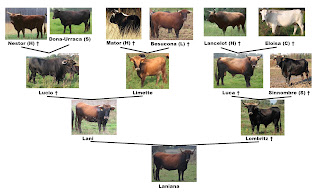 Nestor was, as the “N” implies, born in the Neandertal and is the father of Lancelot. He is also the father of Lucio, a large Heck x Sayaguesa that left many descendants. Besucona was one of the ABU’s three Lidia cows. Lombritz was used as a breeding bull at Klostermersch-Süd until he died when he broke into the ice. Limette and Lani are not in the herds anymore, but I don’t know if they are used somewhere else or have died already. 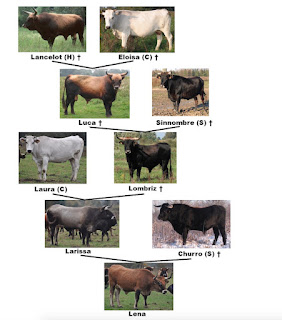 Lena is the daughter of Larissa, which probably measures about 160cm at the withers and is their largest individual at the moment. The father, Churro, was a beautiful Sayaguesa bull that produced a lot of good-looking offspring. 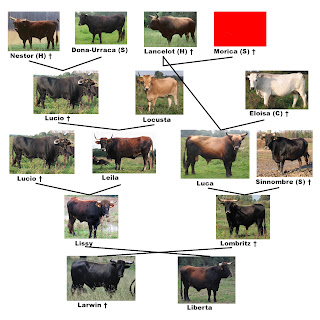 Morica was the only individual for which I was not able to find a photo, but I didn’t want to throw away the whole tree. The light colour of Locusta is very surprising for a half-Sayaguesa, but it seems that her father Lancelot carried some dilution in its genome (see the light brown colour) that might have left a mark in his daughter’s coat colour. Larwin was used as breeding bull at Disselmersch for a short time, but was slaughtered for his small head, long dewlap and heavy body. Liberta measures at least 153 cm at the shoulders, many of the other cows at Klostermersch-Süd are about the same size. Locusta, Leila and Lissy are not in the herds anymore, but I don’t know about their status. 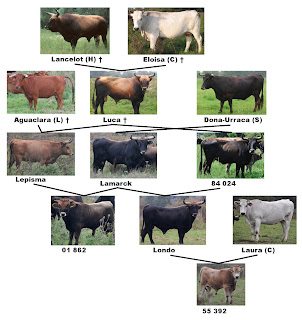 Neither of those young unnamed bulls will be kept in the herd, but it was still interesting to show their ancestry, especially because 01 862 contains all four breeds. Londo is, for now, used as a breeding bull at Klostermersch-Süd despite its longish trunk and the small size. He resembles his father, which is larger and one of their best bulls.