Teaser: Back from the Lippeaue

Last weekend, I visited the Lippeaue and met with the workers of the ABU again. We discussed and also managed to take some more measurements, two bulls (!) among them. I am going to present some photos and results soon, but I need some time to collect the data and also to identify the animals I photographed using up to date stock lists and make one or two posts of it.

Until then, I provide you with a photo of the huge bull 42 623 (nicknamed Laokoon's brother) as a little teaser. 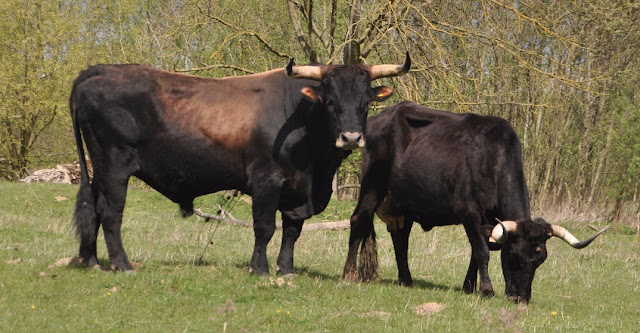 Posted by Daniel Foidl at 13:22 No comments:

News from the Auerrind project + the Maashorst bull

Several weeks passed since my last posts, I apologize. But I have good news from the Auerrind project, Germany.

They announced that their Maremmana and Sayaguesa cows, which have been covered by the Watussi bull Thando last year, are expected to calf within the next weeks. This means that we can look forward to seeing several Maremmana x Watussi plus Sayaguesa x Watussi calves being born. I am especially looking forward to the latter combination, because of the potential for the F2 generation (strict sense) - imagine a Sayaguesa with mighty horns and the colour dimorphism that their strain has, already a good step towards aurochs-like looks.

While I think that Maremmana x Sayaguesa and Hungarian Gray x Sayaguesa might resemble many Taurus and Tauros individuals quite well, I am particularly excited on seeing Sayaguesa x Chianina and Watussi x Chianina animals. The first combination has a big potential for the F2 and following generations, while the latter combination is completely open what it is going to look like. But in any case, the combination has a good potential as well, especially because the body shape and size of the Chianina in the Auerrind project is superb.

They also published a new photo of the Sayaguesa x Hungarian Grey heifer. The winter coat starts to shed on face and neck and seems to reveal that at least the anterior part of the body is going to have a slightly diluted colour. The next weeks will probably reveal how far this dilution is going to go; even if it ends up totally grey (which I do not believe) it is not relevant, as it is "just" an F1. It will be interesting to see in what angle the horns are going to grow, but we have to wait for about two or three years to be sure.

Moving to a different project, I recently found some more photos of the bull at Maashorst:

Copyright as given in the picture. I still suspect it is another Maremmana x Pajuna cross. I really like the well-developed hump, it has a good body shape and looks like a good start. I keep guessing which breed might be ideal to cross it in the following generation; adding Maronesa would probably bring in genes for the right horn shape and would not add any deviant colours, but the results would decrease in size.

Yet another project, I also found another photo of a Taurus bull from Hortobagy, Hungary that has been presented on the Carnivora Forum already.

I have no idea concerning its breed background. I wonder if the impressive horn size is due to the influence of Hungarian Grey or Watussi, or maybe large-horned Heck cattle.

Looking at all this, I think these years are the best in terms of breeding-back so far. There are so many projects working with different breeds distributed over a range of countries all over Europe. It is really enjoyable to watch.