The Lippeaue Taurus cattle population, which represents the top-level of quality for Taurus cattle breeding or perhaps aurochs-like cattle in general, now has a new and extensive web presence on the website of the ABU.
I covered the Lippeaue herd in a lot of articles on this blog already, as I visited it in 2013, 2015 and 2017, and used it as a case-study for many aspects of breeding aurochs-like cattle.

Now you can also use the website of the ABU to get some information and photos about the herd. It introduces the founding breeds, the results of 29 years of breeding and a selection of important individuals of the herd, with lots of photos.

A classification for Heck cattle

What kind of cattle breed is Heck cattle? Of course it is a “breeding-back” result. But how would we classify this breed if the concept of “breeding-back” would not exist and letting only the breed and its history speak for itself? 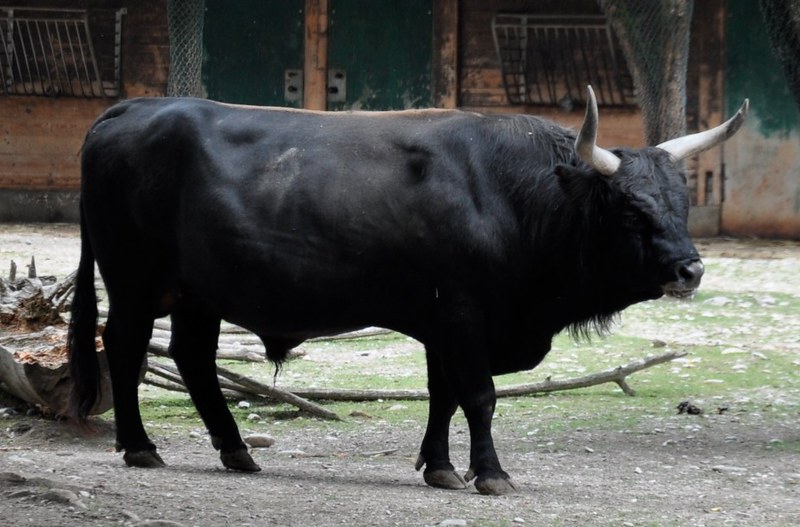 Most important to note is that Heck cattle are “normal” cattle. By that I mean it is not dedomesticated (it does not have a feral ancestry/history), it is not anymore wildtype-like in behaviour, survival capacity, robustness or morphology than the so-called primitive breeds and it is also, of course, not a reconstructed aurochs. Nowadays barely anyone believes that, but when I started getting interested in “breeding-back” these myths were quite present on the internet and literature. Also, Heck cattle is neither an aggressive cattle breed nor the most aggressive breed known. This is simply not correct, despite all the lurid tabloid articles claiming the opposite. It is a robust breed, it is a healthy breed, it an aurochs-like breed but it certainly does not have a special status among all cattle breeds on this world and is not any less domestic than other cattle.

What is Heck cattle based on its breeding history?

It is often claimed that Heck cattle was bred using old and primitive cattle breeds from various places of Europe. In reality, however, Heck cattle is a mosaic breed of both more or less primitive breeds and derived breeds. Central European milk breeds actually played a considerable role in the creation of Heck cattle, including Braunvieh, Murnau-Werdenfelser, Angeln and Black-Pied. And the influence shows indeed: many Heck cattle bear striking resemblance to Murnauer, Angeln or Braunvieh and there are occasionally individuals showing white spots. It was mainly Corsican, Steppe and Highland cattle that contributed the “archaic” look. Heck cattle is therefore not all that exotic based on its ancestry but rather of mostly Central-European descent into which breeds from other regions have been crossed in.
Heck cattle is, in my opinion, indeed more of a mosaic population rather than a true breed. It was created by more or less rampant crossbreeding of at least six breeds and the influx of very few afterwards, started from a small population of only a few dozen individuals that never had a uniform phenotype and were fragmented and spread among whole Germany respectively whole Europe afterwards. Some herds have been barely bred selectively since then, others, like the Wörth/Steinberg lineage created by W. Frisch, experienced rather intense selection. The consequence was a very heterogeneous population that displays a large degree of variability in morphology and also behaviour. Each herd shows a different spectrum of possible trait combinations. Some individuals bear a great resemblance to the founding breeds, and the genetic portion of the founding breeds obviously varies from herd to herd. Occasionally some individuals are very reminiscent of the founding breeds; some individuals are virtually indistinguishable from Hungarian Grey cattle for example (see the individual at 3:19 in this video). More advanced Heck cattle, however, are already a morphotype on their own, such as these individuals here. The degree of aurochs-likeness is just as variable as the breed itself, some individuals are rather good from a “breeding-back” perspective (f.e. here) while others are not (f.e. here).

Is Heck cattle a landrace?

Heck cattle is a robust, healthy and climate-resistant breed that is well-adapted for European nature systems. Does that make it a landrace? Poettinger 2011 does classify it as a landrace. A landrace is by definition a locally adapted variety of domestic animals that were not consciously created but just happened to evolve, experienced little artificial selection but instead were shaped by the natural factors they were exposed to. Landraces tend to be less uniform than normal breeds, more robust and resistant to nature in their local environment. They are somewhere in between a totally artificial breed and a feral population. About half of the breeds that Heck cattle was bred from can be considered landraces: Highland cattle, Grey cattle and Corsican cattle, while the other breeds would not necessarily fall under that definition.

Heck cattle is as robust, healthy and adapted to the environment as a landrace, but I would not classify it as such because of its history. It was artificially created in a very protected environment (zoos and private farms) in the first half of the 20thcentury by crossbreeding landraces and derived breeds and subsequently was mainly kept in those protected environments. It has the same survival capacity as a landrace, but it is not a landrace itself. From the 1980s onwards, an increasing number of Heck cattle were kept under semi-natural conditions and being able to live under these conditions is a requirement in these populations. Nowadays, about the half or even the majority of the total Heck population are kept this way. Some of them, like those in some Dutch reserves, have been living that way for a couple of decades now. Under these conditions, those Heck cattle can become, so to say, a “controlled” landrace that was created consciously and that is also selected upon. Those herds that have been living in zoos or on private farms ever since would have to be excluded from this status. The herd in Oostvaardersplassen, which has been self-sustaining without any human interference for almost 40 years now, is even on the brink of becoming a feral population, and the process of dedomestication is definitely beginning and visible (see here).

In a nutshell: a classification for Heck cattle

Heck cattle is a very plastic population of cattle that was created from a mix of less-derived landraces and derived breeds and is very variable not only in appearance and behaviour but also in the way the herds are kept; some are kept under completely artificial conditions in zoos and on private farms, others live or have been living under semi-natural conditions and one herd is in the process of becoming a feral population. Heck cattle is a breed that was created consciously by breeding, the selective pressure put upon the herds was nonexistent in some lineages to very intense in others, and not only the phenotype but also the husbandry conditions are very versatile in this population. This makes it neither comparable to a true landrace nor to a true breed, but rather a mosaic population.

Posted by Daniel Foidl at 04:19 No comments:

The Heck bull Aretto vs. aurochs

Taking aurochs reconstructions and using them as a direct comparison for living cattle is very helpful for judging their aurochs-likeness. It is way more effective than just eye-drawing and you see all differences at once. I think that my new aurochs bull model is very suitable for this job. I invested a lot of time into making it as scientifically correct as possible and I think it represents an authentic picture of a mature male aurochs from the Holocene of the northern half of Europe.

Aretto  is a bull from the breed line of Walter Frisch, which is a strain that has been excellently. Members of this lineage often have superb horns, especially in dimension, the colour is ok and the bulls often have a shallow hump. The body, however, is quite normal by Heck standards. Aretto was one of the best bulls of this herd, so it is very interesting to compare this individual to an aurochs.
Body size:The aurochs type that my model is based on is 175cm tall at the withers on average. The size for Aretto is claimed to be 160cm in the literature, but I visited the herd myself in 2013, and I consider 140-145cm for grown bulls of this lineage more realistic (I am open to be proven otherwise). So there is a considerable size difference.
Proportions:The proportions are totally different. The head is much smaller, the legs much shorter, the neck is shorter and the trunk more elongated in the Heck bull.
Body shape:The muscling in the Heck bull is reduced, while the intestinum is greatly enlarged, and the spine of the trunk is also slightly hanging. The hump size is noticeable reduced.
Head:The small head in the Heck bull is paedomorphic with a short snout (not that visible on the photo).
Horns: The horns of the Heck bull are similar to those of the aurochs, but they look as if they were pulled outwards and upwards. Their size is smaller than in my aurochs, but there were certainly also aurochs with horns of this particular size. The thickness of the horns is similar to that of an aurochs’ horns.
Appendages:The dewlap and the scrotum are greatly elongated.
Colour: The colour is more or less identical, except for the fact that the Heck bull inherits a less-pronounced sexual dichromatism.

All in all, you see that the Heck bull is a rather ordinary domestic bull concerning body size and morphology and that the similarities are actually restricted to colour and horns. There would of course also be differences in behaviour between a wild aurochs and a domestic individual (f.e. stress response, lethargy/alertness etc.). This does not alter the fact that Aretto, and the Frisch lineage in general, are superb breeding results as they belong to the most qualitative Heck cattle herds around and I would use them for “breeding-back” at any time.
Despite the morphological differences, I believe that a population of Arettos would look and behave indistinguishable from wild aurochs after 100-200 years of natural selection due to dedomestication, apart from size probably.

More of these comparisons between the aurochs model and living cattle are to come.

By the way, when looking at this photo of Aretto, I think it is possible to detect the Watussi influence that is documented for the Neandertal/Frisch lineage (which is, per se, not a bad thing in my opinion), but more on that in a future post.
Posted by Daniel Foidl at 09:04 4 comments: