This site was created only two years ago in 2013, with a starter herd numbering 3 individuals. Now there are several adult and subadult animals. The breeding bull is Linnet, son of their now dead Sayaguesa bull Churro and a cow that I simply classify as a “mix” (without Lidia). Linnet made a good impression on me when I first saw him on a video, but now he looks short-legged, so it is not sure how long he will be kept as a breeding bull. He has a colour saddle, which I am not a fan of, and also a bit paedomorphic face. The horns have a nice curvature (see the photo), but in an aurochs they would probably protrude several inches longer (nevertheless nice, thick horns). The oldest individual is the cow Ludovica, one of the “oldies” (Heck x Chianina). She is the stabilizing element in the herd in the social sense. Together with Linnet she gave rise to a beautiful young bull (01 851). For now, 01 851 has good proportions, but the question always is how much that is going to change. The coolest thing to me in this herd are two Chianina x Sayaguesa cows. Bionade was introduced in my 2013 post already. She is 3 years old now. Her colour is very diluted, which is not surprising since she is half Chianina which have dilution genes on at least two loci (dun [semidominant], agouti [recessive]), perhaps more. The horns are tiny, but I do not consider that dramatic considering the potential she bears regarding size and body shape/proportions. She is rather tame, and I measured her at about 155cm. The other Chianina x Sayaguesa cow (79 810) has a really nice body shape: slender waist, hump and good proportions. In this respect she is one of the best cows in my opinion. Bionade has a calf plus a 1,5 year old daughter 01 816. She looks good, let us see how her horns are going to be. The father is Laokoon (Sayaguesa x (Heck x Chianina)), who was sold. 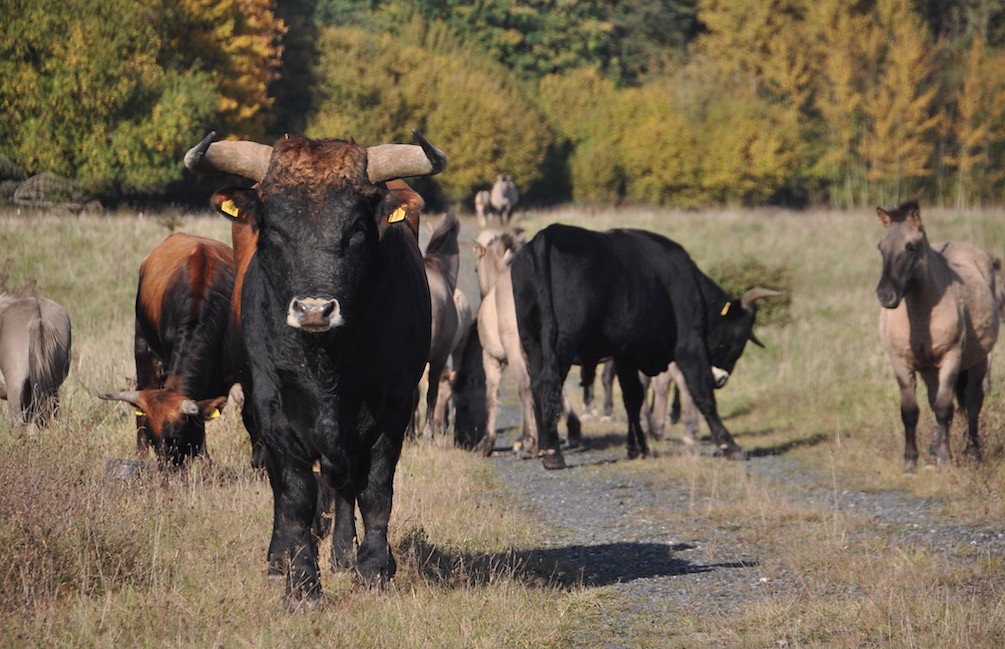 This herd is the one with the highest Lidia portion, because (unless I am wrong), the Lidia x Heck bull Loco (now dead) was used as a breeding bull for a few years. Loco is the father of Latino, who also produced a few animals (by the way, my suspicion I had in 2013 that Latino is the father of this bull at the right at Pöppelsche was confirmed). He is the father of Limicola falcinellus, whose mother had Loco as father as well. She also has a bit of Chianina in her ancestry. Luzerne is a cow that could be mistaken for a “normal” Heck cow – she is indeed largely Heck, but also Sayaguesa and Lidia. The herd has a number of nice young bulls. The best one of those, 79 843 (I presume), a son of L. falcinellus, has large horns and looks nice over all. But he will be removed because he is one of the “nervous ones”. But there are other nice young bulls there as well that I am unable to identify because the ear marks are not clear on my photos. There is a half-Chianina cow (Linea) in the herd, which is another daughter of Lombriz and half-blood sister of Larissa. She is, not surprisingly, the tallest one in the herd, but not as tall as her sister. 92 579 is an interesting case because of her colour with the dark mouth. It is a dilution that is found in Highland pretty often, but also in Lidia and rarely appears in Heck cattle to (the most obvious trait is the dark mouth). Because it is way more common in Lidia than Heck cattle, I thought Lidia might be responsible for that colour at first. But in Disselmersch, there is another cow with that colour that does not have Lidia ancestry. Maybe Chianina carries the alleles for that colour, masked by the dilution factors. The cow Lambada has very good horns speaking of curvature (they could be longer and thicker) and is three quarters Heck and one quarter Sayaguesa. The cow 79 845 is the daughter of Churro (pure Sayaguesa bull) and Linea, so mostly Sayaguesa and Chianina.
One of the highlights in the herd is Lamarck. He is eight years old now and the new breeding bull at Klostermersch-Nordseite (was also used on Kl.-Südseite for a short time) now, and I still think that he is the best-looking Taurus bull I have seen so far. He is good in all respects – not perfect, but really nice. I guess most of my readers will know, but Lamarck is the son of Luca and Dona-Urraca, therefore Sayaguesa x (Heck x Chianina).
Another highlight is the presence of a Wörth cow named Nadia. There had been no pure Heck cattle in the Lippeaue for a few years (for good reason, of course), but I always thought a cross between a large-horned Wörth cow and a good Taurus bull would be interesting. Early in February, Walter Frisch sold his herd at Insel Wörth, and the ABU decided to by a good cow. Although huge-horned Erni was not available, they got a good one (at first I thought they would purchase Arizona, but they choose Nadia, which has larger horns). The Wörth cow and Lamarck are flirting around a lot, so we can expect the vision of a Taurus-Wörth cross becoming reality next year. Of course it will depend on chance how this combination will look like, but it is about the potential that is in it. If you look at the photos, you can also see the prominent size difference. 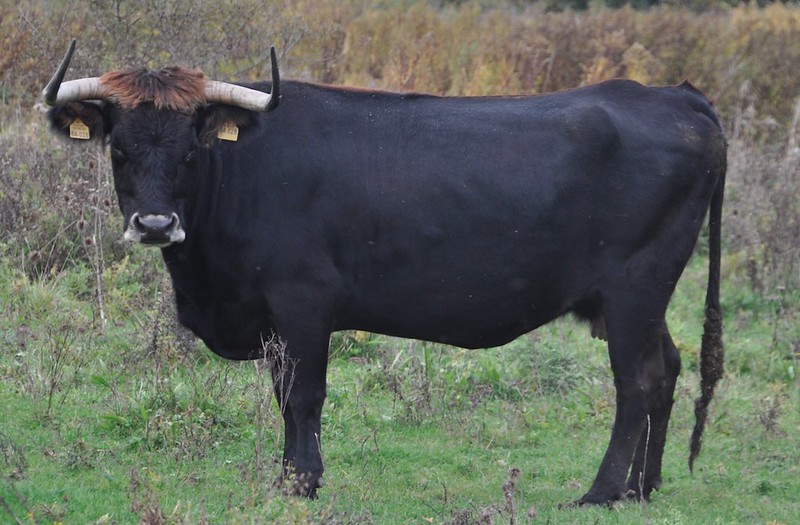 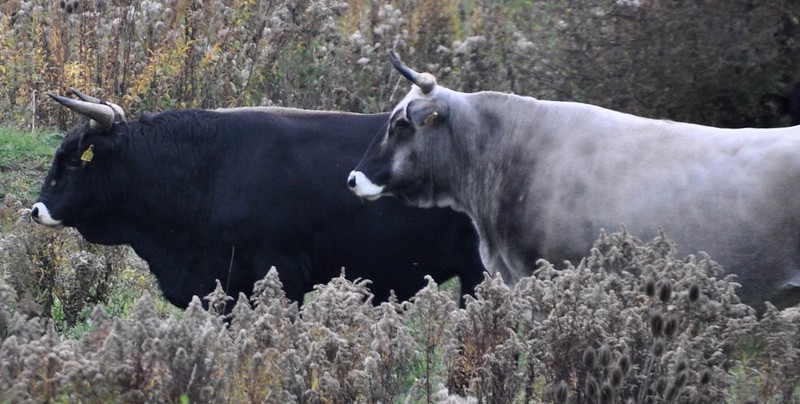 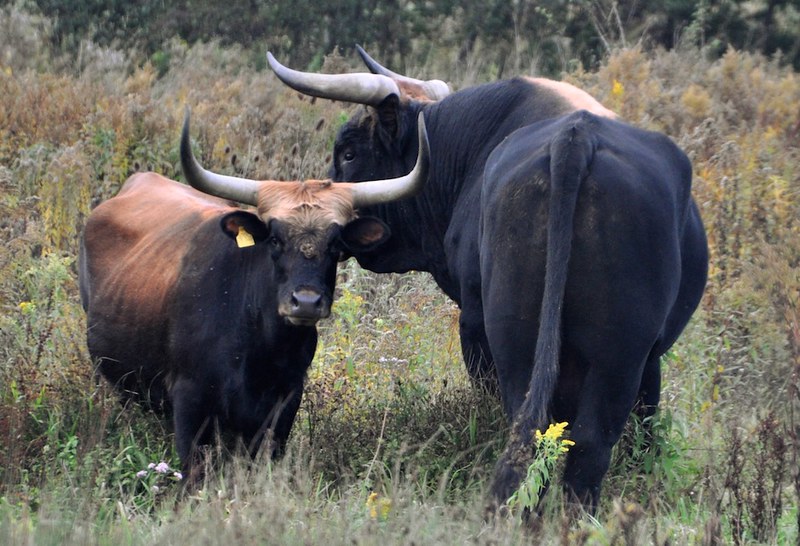 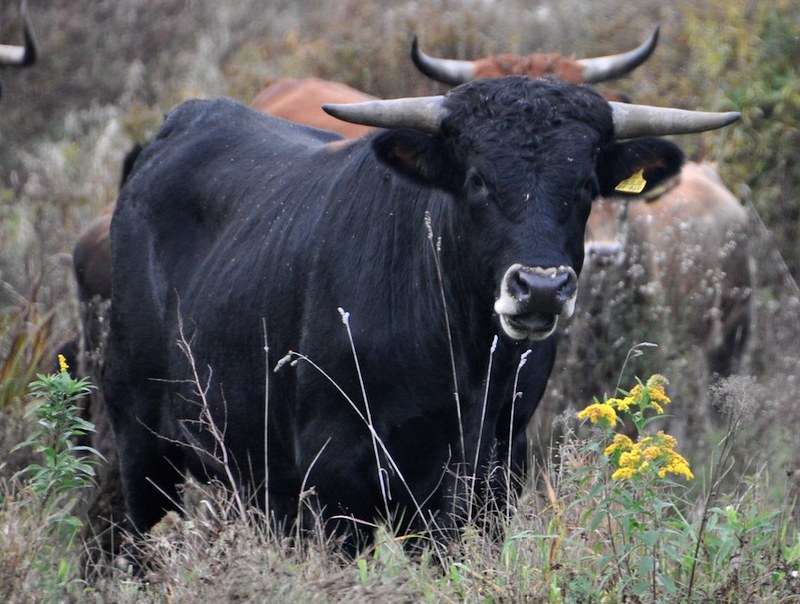 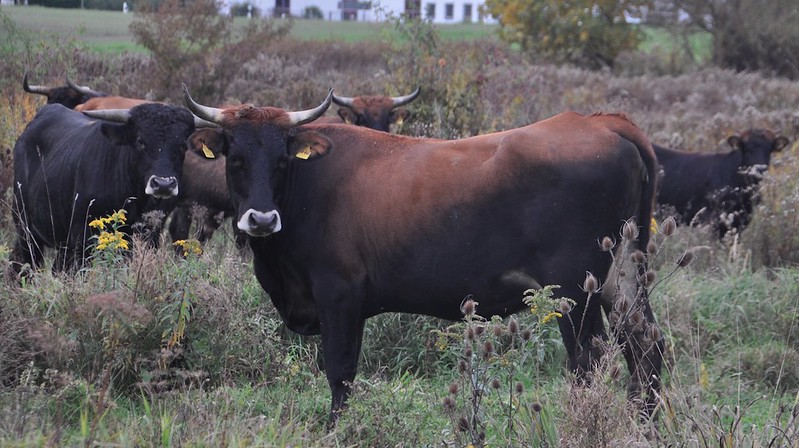 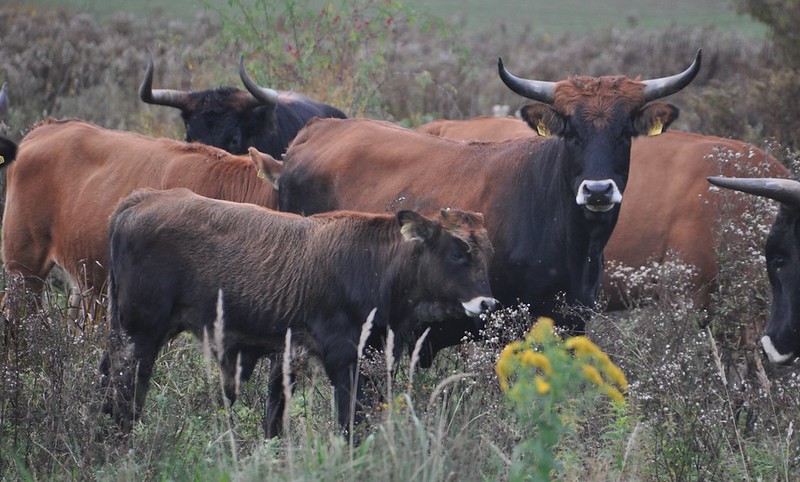 This is the herd that changed the most since 2013. Back then, the herd was composed of animals that were mostly influenced by Heck and Sayaguesa only. The breeding bull Larwin was slaughtered because he was not good: small head, long body with short legs, long dewlap. The oldest cow there died and I was not able to find other individuals of the old herd in the current stock list. The new herd is composed of young individuals. The bull, 01 856, is not bad overall. I especially like the shape of his head, but the horns are really small. The bull is about one and a half years old, so they would continue to grow, but they would still remain less then desirable. So it was decided that he is going to be slaughtered and – if I remember correctly – replaced by the young bull from Kleiberg. 01 856 is the son of Laokoon and Larissa. The best cow there is 42 650, a daughter of Lamarck and Lirgit. 79 842 is a daughter of Lamarck as well, and her mother was 42 634, a “true F2” Sayaguesa x (Heck x Chianina) (now butchered, behaviour was undesirable). That means she might be genetically more stable, but her aspect is not that impressing to me. 01 852 is another one of the three dark-mouthed cows. Her parents are Laokoon – Sayaguesa x (Heck x Chianina) and Lale – (Heck x Sayaguesa) x (Heck x Chianina). So she rules out that Lidia is responsible for that colour variant. The young greyish cow looks promising (don’t know her combination EDIT: She is a fullblood sister of Larissa, therefore 62% Chianina) in regards to her proportions and body shape, but unfortunately she might be infertile because she is twin with a male. 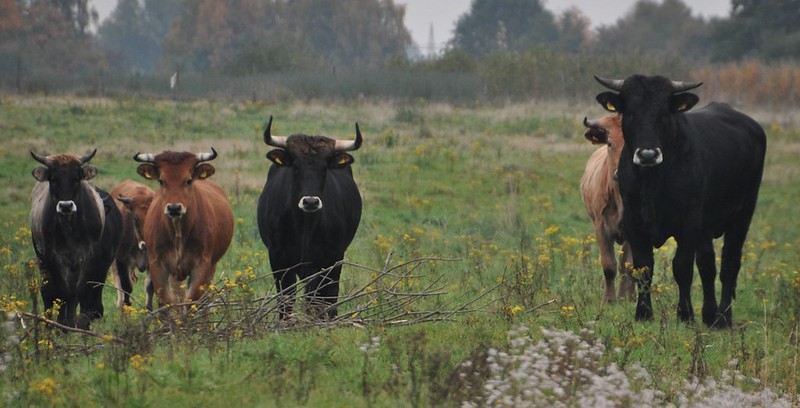 By the way, here you can have a look at a video of the Disselmersch herd (not filmed by me):