In 2015, I did models of an aurochs bull and cow in scale 1:10 made from polymer clay. You can see them on this post, they are displayed at the Alpenzoo Innsbruck now. I think that from an anatomical and artistic perspective, they were good but not perfect. So I started a new model a few weeks ago.
It measures 33cm at the withers, so it is in 1:5,3 scale to a 175cm bull. I started with a base made from cardboard and wire and added a ribcage made of papier mache. The rest of the model is made/will be made of air-drying modeller clay.

The basis for the model is my recent aurochs bull reconstruction, which is based on the Sassenberg bull skeleton with added traits from the Kopenhagen skeleton. I am using photos of both specimen as well as that of the Vig skeleton as a guide. So to say, my model is based on three more or less completely preserved bull specimen.

Here are some work in progress photos: 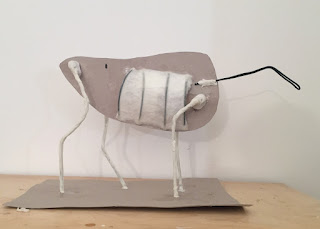 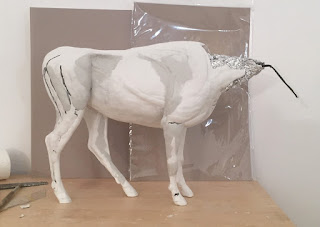 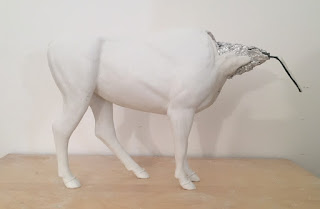 I plan to add a special feature to my aurochs bull model: I want it to have replaceable horns that can be seamlessly stuck onto the model, so that I can exchange the horns. I would do one pair of horns for each type of horn shape, size and orientation. The reason is that European aurochs simply had such manifold horns in these three respects (the curvature, however was always the same) so that a model with just one type of horns would not appreciate this nearly enough. I will do a test if this is practically feasible and present the various horn types that I am planning to do in a future post.

I am looking forward to finishing the model and hope it works out that well. I am continuously checking the model for accuracy (proportions, shape) by doing measurements and using photos and comparing it to the original skeleton(s). When it is done, I am going to paint it with acrylic colours.

If course I am going to paint it in the best-supported (or, to  put it differently, the only supported) colour scheme for European aurochs bulls: completely black with a light dorsal stripe and a (perhaps reduced) muzzle ring. But there are other colour variants that are also plausible for an aurochs bull (go here). In order to appreciate that, I am also planning to do multiple models (perhaps only about 8-10cm withers height), all copies of each other, and paint them in the other colour variants that might be plausible.

Maybe I am also going to do female for the bull, in the same scale and also based on my most recent reconstruction. I would also do some mini models for the cow in order to appreciate the many colour variants plausible for aurochs cows as well. A model for an Indian aurochs would also be very tempting.

I know these plans are ambitioned but I hope to finish the large bull model at least and I am very optimistic about that one.

When the basic shape for the aurochs bull is done, I will use it for a volumentric weight calculation in order to get an idea for the weight of a grown aurochs bull.