Another video on the Quagga Project

ABC News made a short reportage on "De-extinction" of extinct species, focusing mainly on the quagga from 0:58 onwards. I think that most of my long-term readers will be familiar with the information provided, but there are nice shots of the Rau zebras. Should I ever be to South Africa, my goal would be certainly to visit one of the QP herds.
By the way, I really agree with what Dr. Robert Fleischer (geneticist, one of the autors of "A rapid loss of stripes: the evolutionary history of the extinct quagga) says in the video about the extinct-ness of the quagga, for reasons I outlined in previous posts (see here). However, I am not agreeing with the "we can do it but should we do it?" quote.

Posted by Daniel Foidl at 12:21 No comments:

My aurochs models at the Alpenzoo Innsbruck

My two little models of  aurochs bull and cow (for a precise description see here) are now on permanent display at the Alpenzoo Innsbruck, for anyone who would like to see them in real: 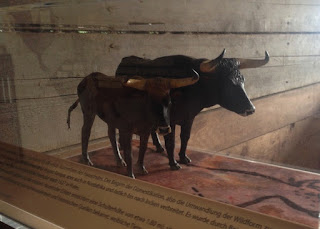 The Alpenzoo Innsbruck is a zoo in Innsbruck, Austria. It has virtually all vertebrate species living in the alpes, and I can definitely recommend it to anyone who is interested in Central European wildlife. It also has a little herd of wisent, I think it is currently the only Austrian zoo having this species on display.

When comparing the anatomy of bison, yak and aurochs in flesh, there is one distorting factor: the fur. While the fur of the aurochs and cattle is roughly (very roughly) the same length all over its body, with exceptions on the tail and the forehead, yak have long hairs at the ventral side of their body, almost reaching the ground. Bison have a huge shock of hair on their head and neck and shoulders are covered in shaggy dense fur as well, while from the end of the shoulders onwards the body is virtually naked. The contrast is not that sharp in the wisent but still evident. These different types of coat make it difficult to compare the body shape and proportions between these four species because the life appearance of the animals is greatly altered.
It would be a funny idea to take a bison, wisent and wild yak (of the same sex of course) and trim their coat, in order to see what their body is actually shaped like. But that won’t happen. So I took pieces of papers and did some sketches. I tracked out photos of individuals of these three species showing them in a useful lateral position. Then I tried to deduce what the body beneath the coat looks like using anatomical knowledge with the aid of photos of skeletal material. The results are inserted below, and I think they might be credible. The reference photos are linked in the caption.

What is interesting is that the yak confirmed my suspicion that its body shape is superficially quite similar to that of the aurochs. Actually, the sketch could almost be mistaken for an aurochs reconstruction, and the animal itself looks like a hybrid of bison and aurochs to me.

And, just out of curiosity, I did a sketch of what an aurochs might have looked like with the coat of a bison. I took my latest aurochs reconstruction and added the masses of hair onto the head, neck and shoulders, as well as the beard. 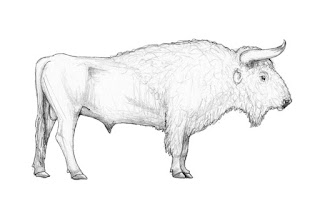 It looks a bit funny, mostly because the head is much larger in relation to the rest of the body than in bison.

Email ThisBlogThis!Share to TwitterShare to FacebookShare to Pinterest
Labels: Artworks, Aurochs, Other

Wild animal populations are not always completely homogeneous regarding their colouration. This is not surprising of course, otherwise their colour would never undergo an evolutionary process. Point mutations happen, and in some cases they either provide a fitness advantage or become fixed by genetic drift or both. The chance for that should be higher when there are considerable biotic/abiotic changes or very active population dynamics incl. bottleneck events occur, or - again - both. Colour mutations can also have negative effects, either because they are linked to deficiencies or diseases, or provide a fitnes disadvantage. Such disadvantageous colour mutations consequently disappear quickly, may be only a singular event. But sometimes new colour morphs are neutral and keep showing up in the population for a considerable time. Famous examples are melanistic leopards and jaguars (leucistic tigers seemingly have disadvantages in the wild). As a side note, of course such mutations are the same that cause the big colour diversity we have in domestic animals, because humans tend to select for unique or different colours. The Plains zebra Equus quagga is not only plastic considering the colour differences between the respective subspecies, but some populations also show a number of colour morphs that appear now and then.
Common among them are pseudomelanistic variations, most of them are found in the Etosha national park (Namibia) as far as I know. These pseudomelanistic zebras are that strongly marked that their stripes fuse together and form a nearly continous black area. In most cases the markings are irregular and messy and cover most of the back (see here, and here). Others show a more regular pattern and are way more beautiful to my eye, like the picture above or this foal. There is an interesting brown version of these zebras too, a foal that did not make it into adulthood (source). This remarkable zebra from Tanzania might be something similar.
There are not only extremely striped zebras but also barely striped zebras. They, like this one, are similar to the animals of the Quagga Project, but sometimes more extreme (see here). Some zebras also have patterns with interrupted stripes, giving them a spotted appearance (here, on the left).
Now to the ones with the diluted colours. This one is a zebra with slightly diluted, brown stripes. Leucistic zebras like this one, or this one from the Nairobi national park, are always popular in the media. But most interesting to me are these: here and here.

It is fun to speculate on the genetic background of these colour morphs. The coat colour genetics of zebras was not studied yet as far as I know, but it is well-studied in horses, what may provide a good clue. Horses and zebras are closely related, and they definitely share the same colour loci and they probably have the same function in both species as well.
I assume that the loci Extension and Agouti are responsible for what we see in the brown, pseudomelanistic foal above, the lightly coloured zebras with the orangish-coloured stripes and usual Plains zebras. The Extension locus regulates the production of eumelanin (black) and pheomelanin (red). Domestic horses have two alleles on this locus, one enabling the production of both eu- and pheomelanin and another one producing pheomelanin only. The latter one leads to chestnut/sorrel-coloured horses. I think it is very likely that the diluted zebra with the orangish stripes are such "sorrel" Extension-mutants. If the E locus enables both the expression of eu- and pheomelanin, there are two possible basic colours: brown and black. The Agouti locus decides whether such a horse becomes brown or black, and I think we see the same here with the brown foal and that zebra from Tansania, opposed to the usual zebras with black stripes.
Unfortunately I do not know which locus regulates the over- vs. underxpression of the stripe pattern. It seems to me that the genetic background of stripes in horses is not studied in general. The only note I have seen so far is that "stripes are part of dun colour" (I'd be grateful if someone has more information on that). There is the suspicion that a zebra's stripe pattern is an extreme expression of the dun pattern, which I as a layman consider likely. It would also be interesting to know which locus or mechanisms influence the actual form of the stripes, and therefore cause these interrupted, spot-like stripes.

Varying colour morphs in wild animals are always thought-provoking to me. They not only inspire me and other paleoartists for colour patterns in extinct equids for example, but also for hypothetic evolutionary scenarios. "Speculative evolution" is the term for brainstorming, hypothetising and doing artworks on ways evolution might have taken if something went different in earths history (f.e. if the late Cretaceous extinction never took place), future evolution or extraterrestrial evolution. There are blogs, books, dA-groups and television documentaries on it. I myself have done a lot of art and concepts on it, but never had the time to present it on the web.
The hypermelanized zebras gave me the idea that such a coat pattern might once be useful for these animals if environmental changes occur, such as if their homeland savannas become closed forests. In this case, darker solid coloured zebras with smaller body size might be of advantage, creating a kind of "forest zebra". I have been planning to ilustrate this idea for ages, maybe I'll find the time and motivation during the rest of the summer.

Posted by Daniel Foidl at 05:22 No comments: