Last week I did some new anatomical sketches based on a number of bull skeletons – the Sassenberg bull, Braunschweig bull, Vig bull and Kopenhagen bull. As usual, I chose photos of the skeletons available on the internet or books, corrected certain aspects if necessary (f.e. the placement of the shoulder blade or flexion of the hind legs is often wrong in mounted skeletons), tracked the skeletons out and reconstructed the life appearance of the animals with a ballpoint pen. I would have done the same with other skeletons as well, so that I don’t always do the same individuals, but for many of the other skeletons I was not able to find photos that allowed to correct the mistakes in the mounts and therefore a life reconstruction would not be fruitful. There is also quite a lack of mounted aurochs cow skeletons in museums, otherwise I would have done a series for cows as well. 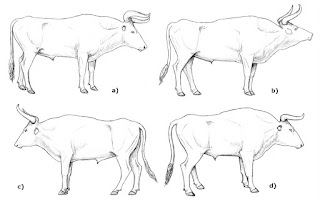 The photos of the skeletons for the Braunschweig and Sassenberg bull were scanned from Walter Frisch’s book Der Auerochs (2011), the Kopenhagen bull is based on a photo I was sent by Markus Bühler and the Vig bull sketch is based on this photo, on which I corrected the position of the hind leg to what I consider anatomically correct.

It is hard to guess how bulky the animal was in life without getting a three-dimensional impression of the ribcage, so I had to guess for the abdomen. Also, the older the bull the heavier. Because of that, I chose to illustrate the bulls as fully grown but not too old. Something that is always the same in all living wild cattle, no matter which genus (be it Bos, Bison, Syncerus or Bubalus) is that the waist is always narrower than the belly, producing a more or less trapezoidal body shape. Since this trait is universal in living wild bovines, we must assume it was also the case for the aurochs. Only in the Sassenberg bull sketch I experimented with a less slanting line of the baculum, giving it a bit more “domestic” look. A trait that is very obvious in all aurochs skeletons are the high shoulder spines, creating a hump in life that is also universal to all wild bovines. The Sassenberg bull seems to have had the smallest hump in this selection, and the Kopenhagen bull the largest. All in all, the Kopenhagen bull probably looked like a large, massive and athletic Spanish fighting bull in life, also because its horns are not as large and wide-ranging as in the other skeletons. This bull, if it was black, might be a good comparison.

Looking at the existing cattle breeds on this world, Spanish fighting cattle (Lidia) and Corriente might have the overall morphology that comes closest to the aurochs. However, it is also likely that morphology adapts after several generations living under wild condition as a result of natural selection and phenotypic plasticity (f.e. see here).