I know of course that wild boar are actually omnivores. One might ask why I included fallow deer, as it was introduced in historical times just like the mufflon. In contrast to the mufflon it has a Pleistocene interglacial record in Central Europe, which is why I included it here. The question is whether Dama dama would have recolonized Europe without human influence. In order to answer the inevitable question “but where are elephants and rhinoceroses?”, my drawing intends to illustrate only those herbivores which had a solid presence in Holocene Europe. It is not known for certain that the European continental elephant species Palaeoloxodon antiquus as much as the two rhino species of the genus Stephanorhinus have been driven to extinction by men and would still be extant without anthropogenic influence today. It is plausible, I even consider it likely, but not proven. One might also ask where water buffalo and Equus hydruntinus, the European wild ass, are. There is only one Holocene remain for the genus Bubalus in Europe (Austria, to be precise) which has been tentatively assigned to this genus by Erich Pucher in 1993, nowadays he would reclassify it as Bos (personal communication). Bubalus murrensis might have been hunted to extinction (although its record is really rare and I do not know of literature mentioning its association with kill sites), but here goes the same as for elephants and rhinos. Europe being recolonized by extant members of Bubalus without anthropogenic influence is speculation. Equus hydruntinus has a solid Holocene evidence in Neusiedl, Austria (Pucher, pers. com.), but as part of a different biome – the Puszta steppe.
When I refer to a mixed-forest zonobiome I do not intend to imply it was naturally all forested. I consider the classical hypothesis of this biome being one closed canopy forest falsified by a number of facts. However, I also consider it an exaggeration to speak of a European savannah, as there is also evidence pointing against such a hypothesis. To me it is most likely that this biome was a mosaic of open, semi-open and closed landscape, depending on a variety of factors also including such as latitude, precipitation, flooding and humidity, natural disasters and so on. This a complex, big and (needlessly) heated debate that is way to extensive for this post and my drawing. I could have drawn my megaherbivores on a grassy background, which would be only one of several habitats we might have encountered those animals, but sporadic oak trees and hazel bushes are certainly a realistic background as well considering they have been pushed in those habitats as civilization progressed and the space for wild herbivores became increasingly limited.

I decided to give my wild horse a bay dun colouration, as bay dun is suggested to have been most frequent in Holocene wild horses by genetic evidence. Historic evidence, which is dubious, would have favoured black dun, but both colour variants plus the non-dun variants are proven for ferus-type wild horses. For details, see my wild horse summary 2017.

And here a close-up view of the aurochs: 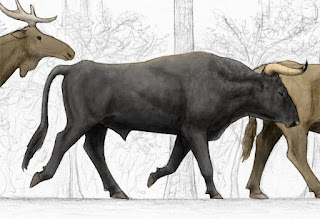 I am very happy with this one, I managed to get it exactly the way I imagine Holocene European aurochs bulls to have looked like. It is based on my reconstructions of several skeletons that I published in July 2017 and I think it bears a striking similarity to many Lidia bulls. I am going to post a refined version of that close-up drawing soon.