Taurus cattle refers to Heck cattle that result from crossing-in of mostly Southern European aurochs-like breeds. This project was started by the German conservation groups ABU (Arbeitsgemeinschaft Biologischer Umweltschutz) and NABU (Naturschutzbund), additionally there is a herd in Hortobagy National Park, Hungary. The purpose of this crossbreeding is to add aurochs-like features in Heck herds that are usually missing in that breed, such as long legs, an athletic body, large body size and forwards-facing inwards-curving horns.

It started in 1996 when the ABU added Chianina and subsequently Sayaguesa and Lidia (Spanish fighting cattle) to their herds in the Lippeaue, North-Rhine Westphalia [1]. A short description of these three breeds:

Lidia: small breed; aurochs-like colour except for occasionally dark cows or bulls with saddles, or reduced markings; medium-sized horns curving forwards and inwards; very athletic body with a well-pronounced S-shaped back; head large and as long or shorter than in the aurochs; dewlap and udder size variable;

The Heck cattle the ABU started with were mostly from of the Neanderthal lineage, which (as I mentioned in an earlier post) display useful coat colour and horns. Lippeaue is the most important Taurus cattle breeding centre, where a number of herds roam the reserve freely all the year round . There are several grazing projects breeding Taurus-influenced Heck cattle in Germany. Besides Lippeaue, another interesting Taurus-influenced herd lives in Cuxhavener Küstenheiden in Niedersachsen, and the Schmidtenhöhe in Rheinland-Pfalz (where a number of Heck and Taurus cows are crossed with a Sayaguesa bull that looks Avilena-influenced to me).

Since Taurus cattle has a more than 15 years-long history now, F3 and perhaps even F4 individuals are born already and all possible combinations of the four breeds exist. Judging from what I have seen so far, Taurus cattle usually have a long-legged and more athletic body than usual Heck cattle, and particularly the Sayaguesa crossbreeds have longish, aurochs-like skulls. The horns usually grow forwards (though not always inwards) and are medium-sized on average. As far as I can tell, the desired increase of body size has been achieved to some degree: “Lucio”, a half-Sayaguesa bull, had a withers height of nearly 165 cm [2]. Lidia-crossbreeds remain at small size, but nevertheless have a good body and horn shape. Half-Chianina usually have a lightly coloured coat and comparably small horns, but also grow larger and have longer legs. Sayaguesa results in cattle with a correct aurochs colour (a very strong red and black portion), long skulls and sometimes also correct horn shape.

This bull is a Sayaguesa x (Heck x Chianina) cross that lives in the Lippeaue:

Another bull of the ABU (I don’t know what combination it is, but it might be (Heck x Chianina) x (Heck x Sayaguesa)):

You get another sneak-peak of a herd in the Lippeaue in this video:

Schmidtenhöhe (IMO, some of the pure Heck cows there are not very useful for effigy breeding):

Taurus cattle do just as well as other Heck cattle in grazing projects, as do Sayaguesa and Lidia. Only Chianina has a less dense winter coat and might be not as tolerant to the cold winters of central Europe. Like most cattle in grazing projects in Germany, Taurus cattle usually are fed supplementary during winter because the areas they live in are not large enough to provide enough food for the herds during winter. I think that Taurus cattle should be regarded as just as hardy and robust as other Heck cattle until proven otherwise.
The use of Lidia might be problematic because that breed is bred for aggression, but I have been told that Lidia crossbreeds are not aggressive but simply more shy and cautious, and therefore more difficult to handle (like any wild bovine would be).

The National park Hortobágyi, Hungary’s largest national park, has herds of Taurus- and Heck cattle in a grazing project as well. This national park is running an awesome project in cooperation with the Zoo Köln, Germany. It covers large areas with a very diverse avifauna and mammal fauna, and grazing animals are used to maintain these open areas that are habitat to all these species (critically endangered ones like the Great Bustard among them). So Przewalski’s horses, Kulan and Heck/Taurus cattle have been introduced in this reserve, also to conduct scientific studies on how cattle and horses differ in food procession, vegetation use and cold adaption.
Additionally to the breeds used in Germany, they also use some other breeds, most notably

There are two herds, one in Pentezug, composed of the more aurochs-like individuals, and one in Karácsonyfok, which is the herd with experimental crosses with influence of Watussi cattle, Gray cattle and also one half Holstein-Frisian cow. The Pentezug herd has pure Heck cattle as much as Taurus crossbreeds and Heck x Gray cattle crosses. I don’t know how the present cross results in Hortobagy look like, but some individuals on older photos (2008) look quite decent while others do not (I am not very fond of most of the pure Heck cattle there):

There are about 200 Heck/Taurus cattle in Hortobagy, enough that the responsible people want to use consequent selection to achieve a closer resemblance to the aurochs. While I am open to how the Watussi crosses will work out, I would not have used the influence of Frisian (a very derived breed that brings in the genes for white spots and is far from being hardy and robust). Hungarian Gray cattle causes undesired features on the one hand (gray colour, upright horns), but might be useful for achieving a more slender body with bigger horns. Furthermore, it is a very hardy and cold-adapted breed that is suited to the Puszta, what might help to adapt the herds to the local climate. Sadly, the Heck/Taurus cattle in Hortobagy seemingly have problems in coping with the winters there while the Przewalski horses do not [4]. Some say that is because cattle are not suited to such a habitat, but we know that the aurochs inhabited the Eurasian steppe as well. I don’t know if it is legally possible, but natural selection and/or selective breeding could solve that in the future, hopefully. At least during the winter of 2011, supplementary feeding was not necessary for the first time because of the mild temperatures.
The breeders in Germany and Hungary cooperate by exchanging individuals to speed up the progress. Personally, I prefer the German Taurus herds, they look more aurochs-like and progressed judging from what I have seen so far.

Interestingly, an increasing number of Heck cattle breeders get interested in Taurus crosses, so that there is no clear distinction between Taurus cattle and usual Heck cattle. 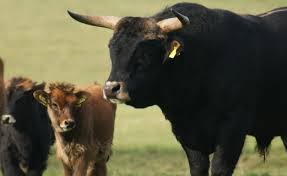 Should Taurus cattle be considered a separate breed? I don’t think so, in my view these crossings are just the work that should have been done after WWII. Taurus cattle bring in important aurochs-like features that are missing in the pool of usual Heck cattle, and combined with well-selected Heck cattle like the Wörth lineage, it might be possible to breed a complete aurochs effigy from that population. The seemingly poor performance in Hortobagy worries me, but the Puszta is a habitat very different from central Europe. It would indeed be interesting to see a large area with well-selected Taurus-influenced Heck cattle roaming completely wild in Germany, to see how their usage of food and adaption to the climate, behaviour and phenotype would change.
Nevertheless, we should not forget that Taurus-influenced Hecks are not stable yet. It is still in the stage of crossbreeding and throwbacks can occur. So the future selection of Taurus cattle has to focus on stabilizing the phenotype (and not to neglect the hardiness and climatic adaption at the same time) and breeding out unwanted traits that the breeds bring in (such as very small horns, a very light colour or black cows).

You can find some more information on Taurus cattle and photos of F1 individuals in these PDFs: