Visiting Chillingham cattle - was there a white Aurochs?

In September last year, I visited the Chillingham Park in Northumberland, England, to have a look at the main herd of Chillingham cattle. These cattle are a very rare and ancient cattle breed, remarkable for their feral history, genetic isolation for at least 300 years and a high degree of inbreeding. I talked to Richard Marsh, the Chillingham cattle warden, and he told me a lot of interesting facts about this herd that I am going to share here. It is often claimed that they are totally wild, undomesticated cattle, but how wild are they truly? Are they related to the aurochs in some way? Let’s dive a little deeper into the history and biology of that breed. 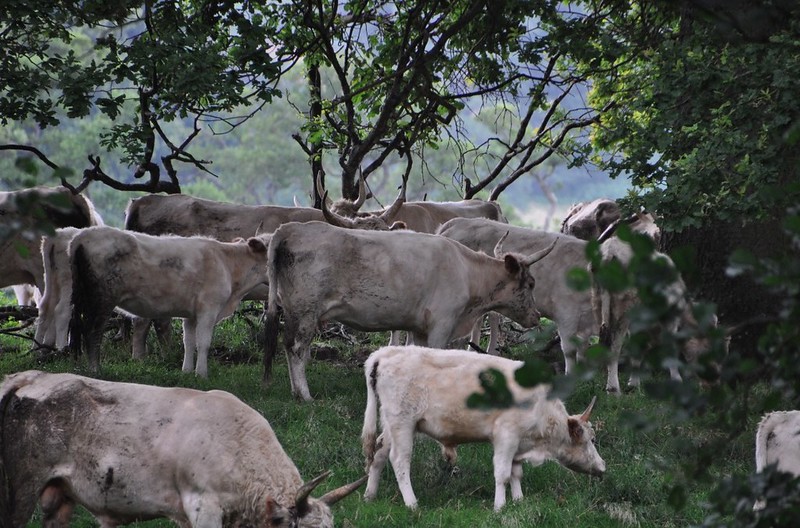 The aurochs died out in Great Britain 3500 years BP [1], before domestic cattle arrived. Claims that Chillingham cattle descended from the first cattle brought to England by the Celts or later the Romans are neither supported by historic [1] nor molecular data. Chillingham cattle belong to the T3 haplotype [2], which is characterized as the “typical modern European haplotype” by Beja-Pereira et al. 2006 [3]. Chillingham cattle is sometimes connected with the aurochs because Charles R. Darwin recognized similarities between the aurochs’ skull and that of Chillingham cattle, but this breed isn’t any more aurochs-like than primitive cattle landraces from Iberia, Italy, North Africa or the Near east. 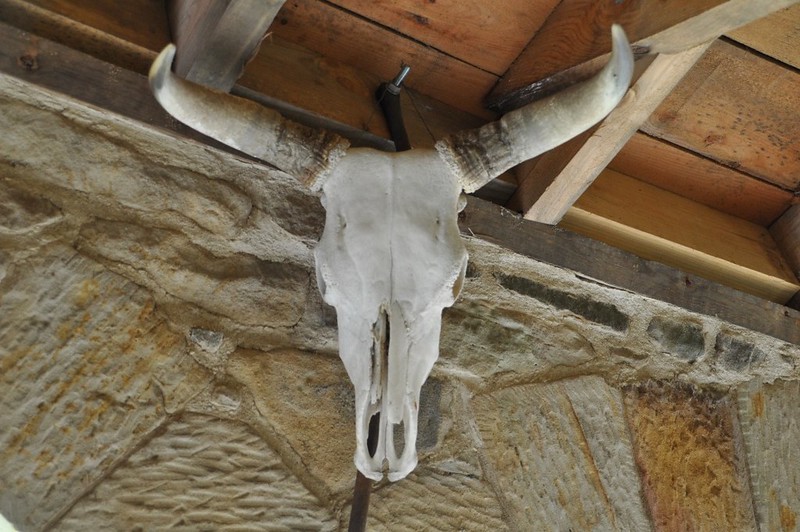 From the first half of the 13th century, British baronial hunting parks included also cattle for hunting [1]. These cattle also served as ornament, and the European nobility usually preferred white animals for such a purpose (f.e. see the Austrian white donkey). While many of the hunting park herds became strongly influenced by Highland and Longhorn cattle, resulting in the modern White English Park cattle [1], Chillingham was the only location to retain pure herds of these hunted cattle, which were probably founded by collecting medieval husbanded cattle between the 13th and 17th century [1].  In the 13th century, a wall around the Chillingham park was built and the cattle were now protected from Scottish poachers, and they survived in this enclosure until today. The cattle live in a feral state and were hunted by the nobility just like Britain’s feral ponies. When they were hunted in earlier days, they were known to be very aggressive and killed dogs, horses and humans involved in the hunt. 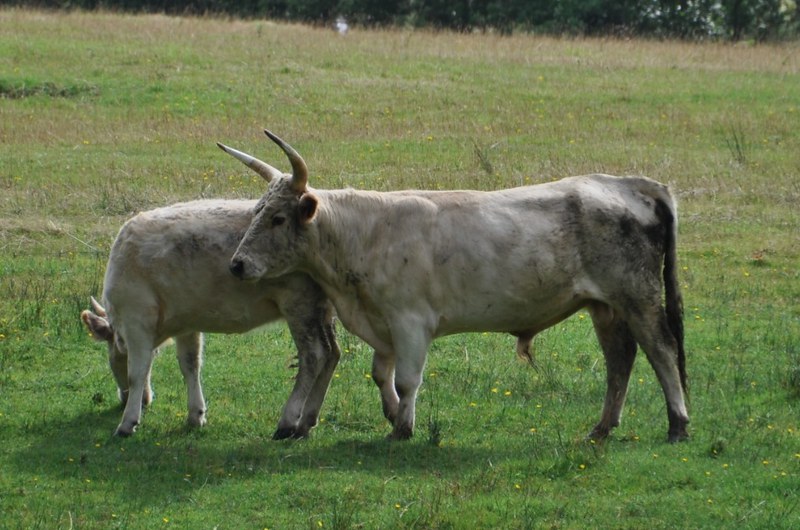 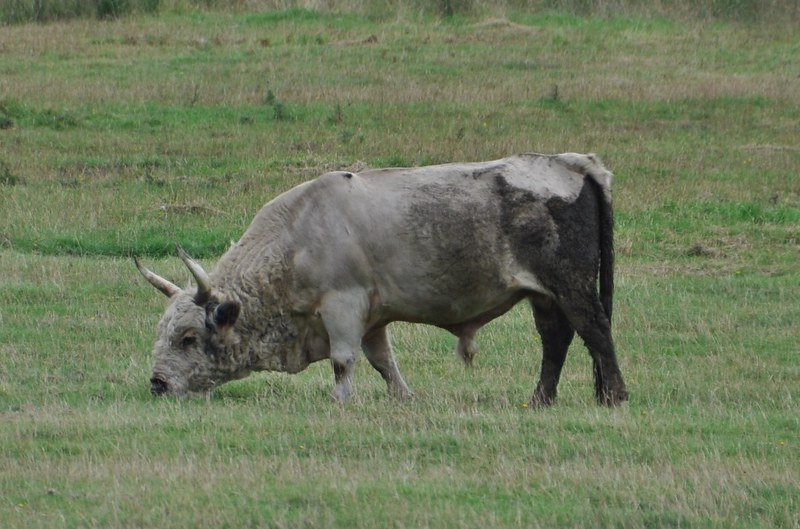 Chillingham cattle are, like most cattle back in the medieval times were, quite small, standing only 110 cm at the withers and weighting 300 kg (for bulls, cows are slightly smaller). However, we know through bone remains that there was a slight trend to size reduction in the population over the last centuries. Their body shape is, although comparably slender and firm, domestic in having no shoulder hump and a rear that is as heavy as the forehand. The udders of the cows are surprisingly large. Chillingham cattle have large heads (sometimes also with a long skull), but their body is comparably short-legged and longish. The horns are mostly upright (100° and more) but aurochs-like in curving inwards, with slightly upwards-inwards facing tips. Among the skulls on display, I found some specimen having even more aurochs-like horns than those in the current population have. Perhaps they stem from the times prior to the most dramatic bottleneck event in the 1940s. The colour of Chillingham cattle is interesting: the nasal mucosa are black and cows are coloured creamish (i.e. darker) on the neck area, what usually is indicative of the wild colour allele E+ (but the calves are completely white while wild-coloured calves are always born reddish). Even more surprising is that bulls are slightly darker (grayish) than the cows, what suggests that they retained some kind of colour dimorphism. Additionally, they have those numerous small black spots on the face, neck and shoulder area. I have no clue about the genetic background of the coat colour in Chillingham cattle. UPDATE: I found out that the colour of Chillingham cattle is caused by the colour-sided allele (Cs) on a base colour that is either black or wild type-coloured. No other breed in the world has the same colour except White Park cattle. The hair on the neck and face area is very dense and curly in Chillingham cattle. This “mane” is claimed to serve as a protection of the bull’s skin during a fight. Some Spanish cattle like the Fighting bull or Sayaguesa sometimes also show is feature, and it is apparent in single Oostvaardersplassen bulls as well. Therefore I wonder if aurochs also may have had it to a certain extent, but this is only speculation. 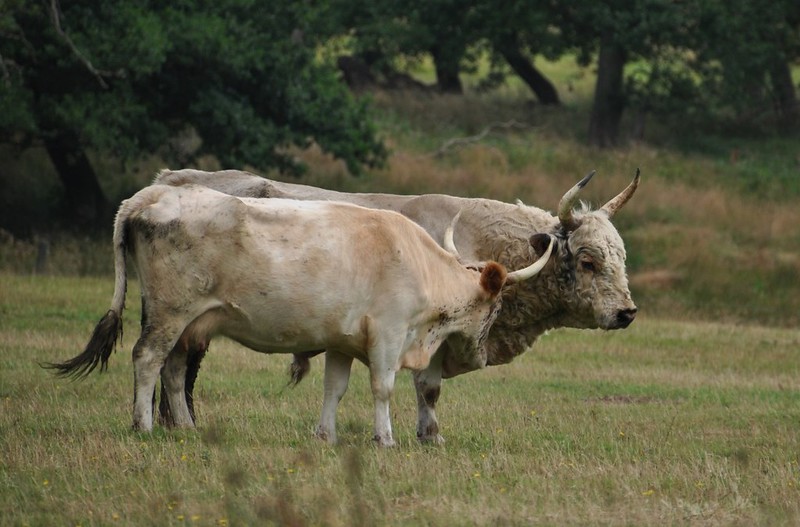 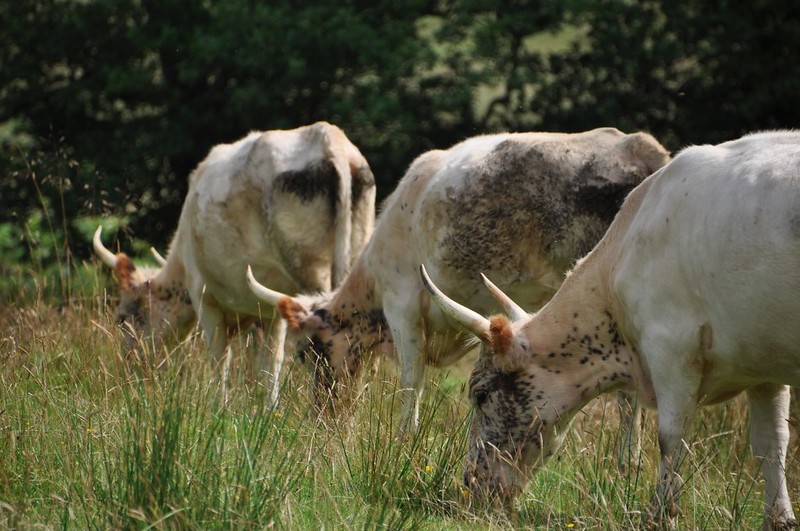 Chillingham cattle are dedomesticated in the sense that they are free to breed themselve and the dominant bulls that cover the cows, and there has never been medical care or any other form of custody. Nowadays the cattle are supplementary fed during winter because the area they live on is too small to provide food for the whole herd, under natural conditions they would migrate. Predators are not present in the Chillingham Park and I don’t know if they ever were, since it was a guarded game park of the nobility. The numbers of Chillingham cattle probably were regulated by food availability, diseases and hunting. Artificial selection on Chillingham cattle was not totally absent. For example, individuals with black ears and light noses were selected out. Also, selection probably played a role in surviving the genetic bottleneck [1] (see below).
When Chillingham cattle, in spite of being feral for several centuries, still have a more or less domestic body, upright horns and small size, why is there a trend in Oostvaardersplassen for Heck cattle developing “wild” body shape and proportions and aurochs-like horns? I think the key to this question is that the Oostvaardersplassen cattle descend from a very variable founding population. Evolution works faster in a variable population than it does in a homogeneous population. And perhaps the selective pressure for saving energy never was that strong at Chillingham because of the supplementary feeding (I don’t know when they started to feed them). Regarding the horns, we should not forget that they are some kind of aurochs-like in Chillingham cattle. They curve inwards, what is functionally very advantageous in intraspecific competitions and was the case in every single aurochs specimen we know. It is possible that the horns of Chillingham cattle were more aurochs-like prior to the bottleneck event, based on the skulls which I saw.

The numbers of Chillingham cattle were documented from 1689 onwards, showing a peak number of 82 in 1913 before they started to decline [1]. The population crashed in the severe winter of 1947 to 13 individuals. Not only have they gone through this genetic bottleneck, but also 300 years of inbreeding, resulting in a highly uniform nuclear genome [2]. Based on mitochondrial DNA, the whole modern population descended from a single recent female founder [2]. It is theorized that Chillingham cattle avoided an inbreeding depression due to purging out deleterious alleles, which was executed by the wardens during the 19th century: weak bulls were castrated and weak cows shot for beef before they could reproduce [1]. Natural selection probably played a role as well, and nowadays there is no culling or castration anymore. Furthermore, cows allegedly kill their weak calves.

I was told that the sex ratio within the herd is 1:1. Having several adult bulls of any cattle breed on one restricted area can lead to trouble, and indeed Chillingham bulls often have severe fights, sometimes injure or even kill each other. The bulls are in constant alertness and have a considerably shorter life span than the cows (13 years). The often repeated concept of a “king bull” ruling the herd is probably too simplistic [1]. Chillingham bulls, like bulls of any other cattle breeds, live in groups of two or three, but are not territorial [1]. Adult bulls vocalize much, something that I also experienced when I visited the herd. It is remarkable that there is no rut and they mate all the year round – this has disadvantages for cow and calf during winter and usually free-roaming cattle redevelop a natural reproduction cycle. Perhaps this was not the case in this feral population because of the supplementary feeding in the cold season.
I was told that the cattle go into the deciduous forest for resting, but interestingly never go into the conifer forests. 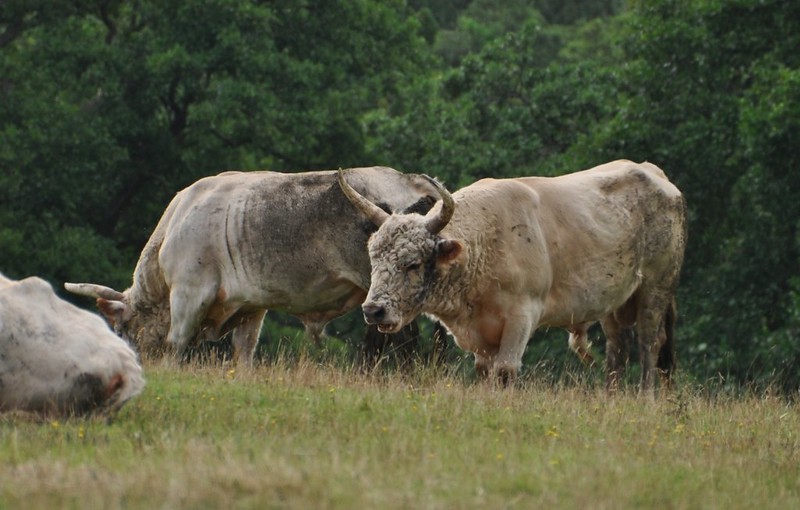 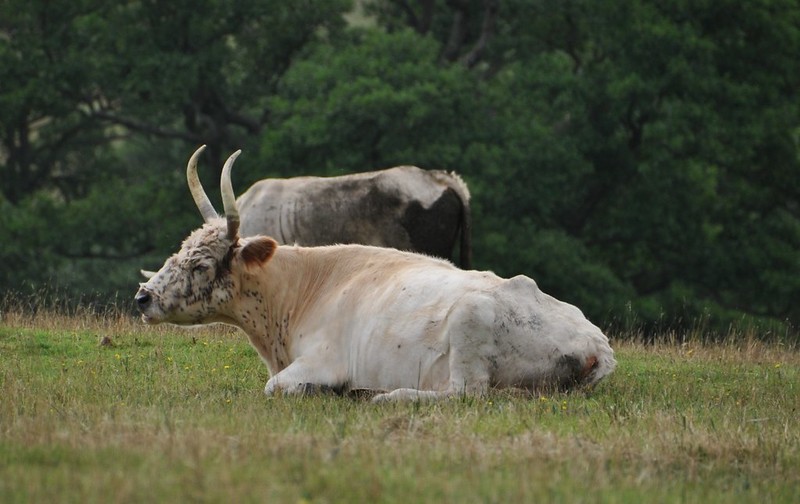 In 2009, there were 85 individuals at the Chillingham Park, additionally to a reserve herd in the north-east of Scotland. I hope that in the future there are more breeding locations in order to conserve these remarkable cattle. It is uncertain whether they can resist diseases transferred from other cattle breeds because of their genetic uniformity, but only trying it will show. 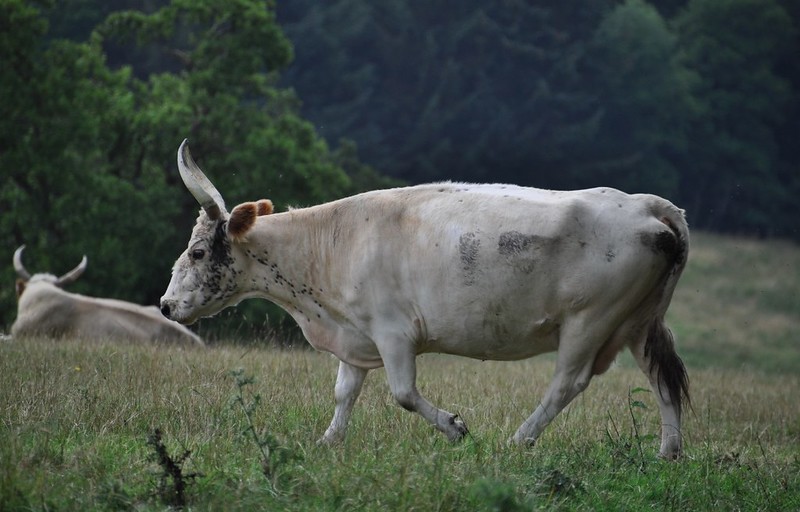 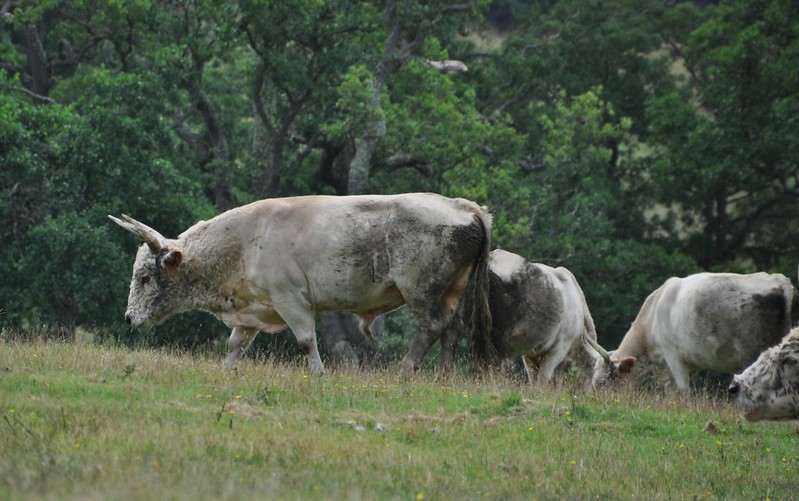 The coat colour of Chillingham cattle as described above is also interesting when looking at some of the cave paintings in the Lascaux cave. Among aurochs depicted in the usual colour (red cows, black bulls), there are some individuals that are drawn only in contours, with prominent black spots on the face, neck and shoulder area. Could these represent Pleistocene aurochs having the coat colour of Chillingham cattle?
This is not totally implausible, as a 2011 study revealed that cave paintings showing white spotted horses were indeed authentic [4]. There are not any other artistic depictions than the Lascaux paintings showing such a colour, nor are there any written references of it. This colour variant, if it existed in wild aurochs, must have persisted at least until the domestication of taurine cattle 8.500 years BP. I do not consider it likely that there were aurochs displaying that coat colour, as the evidence for it is very weak. But it could be worth to investigate by identifying the genes responsible for the Chillingham colour and trying to find it in Pleistocene and Holocene aurochs remains, just like Pruvost et al. did in the case of the wild horse. UPDATE: The colour of Chillingham cattle is caused by the homozygous presence of the Cs allele on a usual base colour. If the colour-sided allele is present only heterozygous, this is the outcome with wild colour as basic colour. I don't consider piebald aurochs to be very likely, as most if not all wild animals are solid-coloured.
That’s a version of my reconstruction of the Braunschweig aurochs painted in Chillingham colour: 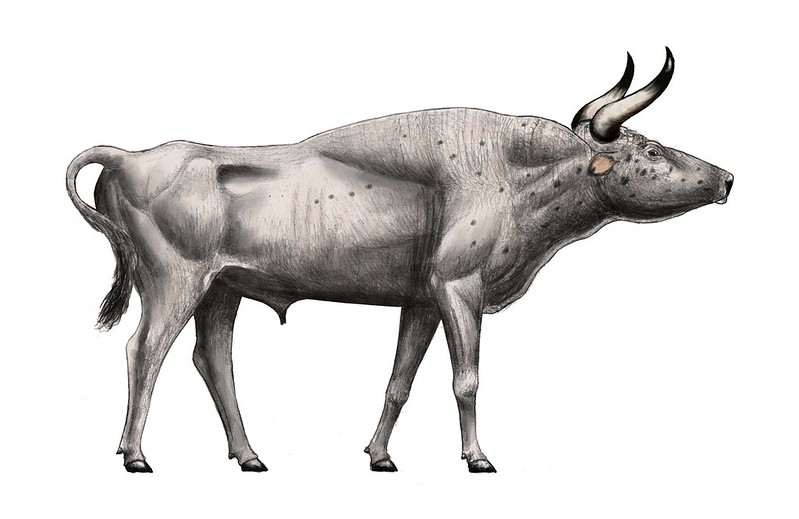