There are 23 preserved skins, 7 complete skeletons and few skulls of the Quagga left on this world. It is not surprising that some of the skeletons belong to the same individual of some skins, perhaps even all. Most stuffed Quaggas can be found in Germany, others in the Netherlands, France, Great Britain, South Africa, USA, Sweden and Russia. Looking at all the different Quagga specimen, which include complete adult individuals as much as foals and only a part of a leg, gives you a fairly good idea of the degree of variation within the Quagga subspecies.

No photo found. Probably not on display. 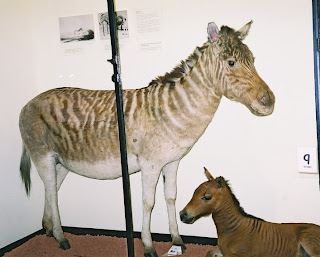 The only skeleton on display that I am aware of is that of the Grant Museum:

You might be wondering what happened to the Quagga mare that was photographed in 1870 and died in 1872 and if she is among the stuffed skins or skeletons that are preserved till today. The stripe patterns of the two specimens in London do not fit the animal, nor does any other specimen. Therefore she’s probably not among the skins. It would be helpful to have more accessible information on the skeletons. UPDATE: I was addressed that the London mare probably is the specimen now held at the museum of Edinburgh, since the stripe pattern do line up. For a better photo of this specimen, go here.

Call me crazy, but the stuffed skins give me hope that the real Quagga might return some day. A 2009 paper [1] reports that mitochondrial DNA has been successfully extracted from stuffed specimens of the Thylacine, Thylacinus cynocephalus, so there is the reasonable chance that some of all those Quagga skins still preserve certain amounts of DNA. Theoretically, those almost thirty individuals might be enough to recover a healthy population, but I think it is much too optimistic to expect that all of them contain enough genetic material to be cloned. It probably would be a challenge already to gain enough material for at least one individual. However, if one - or even two or three - Quaggas could be cloned one day, it would be a huge sensation. Those Quaggas could be constantly bred into the Rau zebra population which would provide a genetic base for a new near-Quagga population.

Email ThisBlogThis!Share to TwitterShare to FacebookShare to Pinterest
Labels: Quagga