They would look awesome. Colour is one of the most prominent aspects of an animal’s look, and the first one that catches our eyes. I realized might also blur our perception of aurochs-likeness: a cow with aurochs-like colour that otherwise looks like a farm cow (f.e. many Heck cattle) might appear to be more aurochs-like than a Chianina with way more “primitive” proportions, body conformation and size.


That’s why I hesitated to consider Chianina a primitive breed until one and a half year ago or so – I thought the “wrong colour” is a considerable malus. But first of all, since there is not simply one colour locus that decides whether a colour is wild type or not, the colour of a breed is probably unlikely to be mutated on each locus. For example, Highland cattle are either Ed or e, so the production of eumelanin in the coat is either over-expressed or totally disabled, so we cannot say if they have the genetic make up for sexual dichromatism. Only crossbreeding or genome editing would provide a clue. The shiny red colour of some Highlands implies that they would have probably a nice and un-diluted aurochs colour (independent of sexual dichromatism) if they had the E+ allele. And so forth.


Chianina has the wild type base colour E+ and very likely also sexual dichromatism masked beneath the dilution factors (see the previous post).


Furthermore, and what is way more important, colour is regulated only by a few loci which follow the Mendelian rules quite clear (ignore the transposons that cause some colour variants which are not relevant for aurochs effigy breeding anyway), so it is way easier to breed for or against colour variants than it is for traits like size, proportions, appendages, horn size, skull shape and any other polygenic traits. This should be known to any animal breeder. Therefore, I prefer an aurochs-sized and aurochs-proportioned Chianina over a mediocrely aurochs-coloured Heck.


Anyway, to see how colour affects our perception of the looks of an animal, and also to see which results crossbreeding with Chianina can achieve, I did this drawing of hypothetical aurochs-coloured Chianina using the photo of a cow from Wikipedia and that of a bull I found via google (I would like to put the link there, but I couldn't find it anymore): 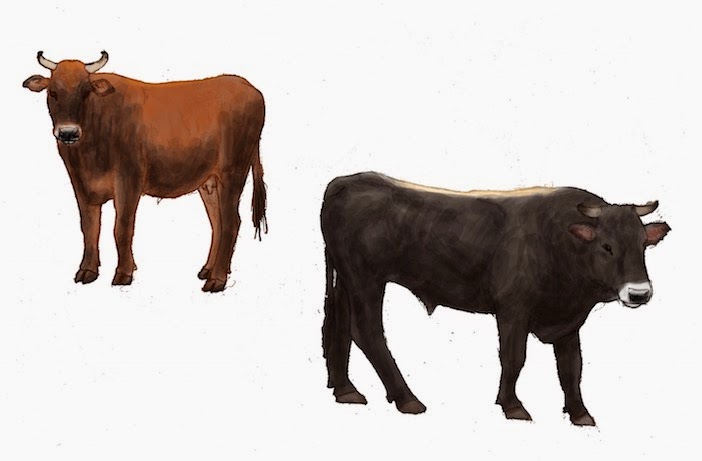 I admit the drawing is sloppy. But it was not my intention to fabricate a masterpiece, but merely to give an impression how such Chianina would look like. It would probably take a while to breed them, because all those annoying dilutions are at least partly recessive. All aurochs projects and Heck cattle have this problem.


Aurochs-coloured Highlands might be easier to breed because they do not have such dilutions, brindle is widespread but dominant and therefore easier to eradicate from the population. Taking black Highlands would be wise to avoid the recessive red variant, and crossbreeding with Maronesa might be the fastest way because they have the desired sexual dichromatism and long horns as well. It would be pointless from the breeding-back perspective, but fun. Initially I intended to draw hypothetical aurochs-coloured Highlands as well, but was too lazy in the end.