I finally get to making a post on the African subspecies of the aurochs, Bos primigenius africanus. I actually planned to do this post two years ago, but never found the time to do an appropriate artwork on its putative life appearance. This week I finally finished one, so I am going to sum up what is known about the life appearance, phylogeny and ecology of this subspecies.

Previously, it was assumed in the literature that aurochs descended from the Asiatic species Bos acutifrons which lived in Asia 2 million years ago (van Vuure, 2005). However, the oldest remains of aurochs have not been found in Asia but in Africa. The remains include a huge-horned skull from Tunisia dated back to 700.000 years (Martinez-Navarro et al. 2014). Aurochs appeared in Spain shortly after this individual died, perhaps migrating directly from North Africa (my personal guess, but I do not know if they would have been able to cross the Gibraltar street via island hopping or something similar). This could mean that aurochs reached Europe twice from two different populations, and genetics indeed showed that Southern European and Northern European aurochs differed genetically (Mona et al. 2010). My suspicion is endorsed by the fact that the basalmost African aurochs skull also shows the largest horns known to date and that Pleistocen Italian aurochs have also been described having particularly large horns (Frisch, 2010). What is important to note is that there are no noteworthy osteologic differences between later B. p. africanus and B. p. primigenius, so that the differentiation of both subspecies might be based on solely geographic basis (van Vuure, 2005), especially if my suspicion is correct that European aurochs populations could be polyphyletic. What is interesting now is that the osteologically different B. p. namadicus seems to have diverged from the primigenius/africanus clade much earlier, somewhere 1,7-2.0 million years. Probably the progenitors of the namadicus clade migrated from Africa to India rather early. This supports the view that namadicus and therefore also zebuine cattle are a separate species, but that is only paperwork that does not alter the animals themselves therefore it does not really change my conceptions. More on the Indian aurochs in a separate post coming up. For previous posts and artworks on the Indian subspecies, see the 2015 post and the 2013 post (I consider the latter outdated).

As a remark, I do not consider the 700.000 year old aurochs skull a member of Bos primigenius africanus, even though it is from Africa. I consider aurochs from that time the most basal members of the clade before any subspeciation took place.

Paleoecology of B. primigenius africanus

The African aurochs was neither an animal of the savannah nor the Sahara. Rather, it was present along the northern rim of the African continent from Morocco to Egypt and along the Nile delta where it was abundant (van Vuure, 2005). These North African ecosystems where the overlap zone of both the African and European biome, where European megafaunal species such as wolves, brown bears, red deer and aurochs lived along African megafaunal species such as African elephants, rhinos or hartebeest. Certainly the African aurochs was adapted to the way more arid climate of this region than aurochs from Central or Northern Europe.

Life appearance of the African aurochs

As mentioned above, the literature says there were no noteworthy osteologic differences between later B. primigenius africanus and European aurochs. Genetics would further have to show whether there was a continuum to the Middle east or not.
However, there are at least three prehistoric stone carvings from Libya that suggest the African aurochs had a distinct trait that distinguished it from the European populations. While there are good reasons to believe that so-called colour saddles did not appear in wild European aurochs bulls, it was seemingly the case in at least some north African wild bulls. 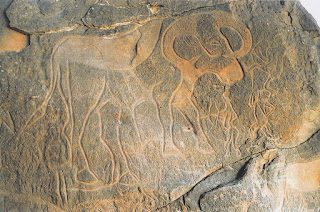 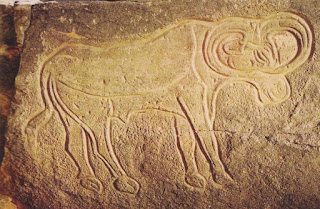 The two pictures are scanned from Frisch 2010 and © by Rüdiger Lutz. For the third one, go here. They show two engravings that definitely show grown, male aurochs with a colour saddle that is clearly indicated and extends till the hips. It can be ruled out that they show domestic bulls as they date back to 12.000 years ago, and are probably fully grown as the huge size is implemented by the small hunters surrounding them. The uppermost carving is from Hadarin in Lybia, other one probably too. The uppermost not only shows the colour saddle but also nicely the white muzzle ring and the light colour of the horns. The third picture is less anatomically precise and is from the flickR stream of archeofan and from Lybia as well. The upper scan actually shows another individual with a colour saddle (right side down below in the picture) but the sex is not visible on the photo. They are all stylistically very similar so probably from the same culture. It is also possible that one artist copied from the other, which is why artworks are imperfect evidence, but in this case we would have evidence for at least one African aurochs bull with a saddle.

So while there are many literature and art references that support black bulls for European aurochs and absolutely none that suggest bulls with a colour saddle for Europe, there are at least three artworks supportive of this trait in North African aurochs. It could be a coincidence and maybe both European and North African aurochs showed saddles on occasion, but I think the chances for that being a coincidence are way lower than for the conclusion that European bulls usually were of a black colour and North African bulls seemingly had a colour saddle.

This is actually not unlikely. The aurochs had a large distribution area, and we often find that subspecies of wild bovines may vary in colour. Actually, the fact that North African aurochs bulls might have had a colour saddle would simply imply that the sexual dichromatism was not as strongly expressed as in the European subspecies. Other wild bovine species show geographic variation in this respect as well. For example, the Java banteng (Bos javanicus javanicus) shows the same colour dimorphism as European aurochs: black bulls, reddish brown cows. The Burma banteng (B. j. birmanicus) has a very reduced sexual dichromatism, both sexes are of a light brown colour. The Borneo subspecies is intermediate. Also Gaurs vary in sexual dichromatism, some populations having virtually none while it is more or less visible in others. The African forest buffalo also differs in its colour from all the other African buffalo subspecies (which is one of the reasons why some regard it as a separate species).
So it is absolutely plausible that the African aurochs, as a result of genetic drift and living in a different habitat/climatic zone might have displayed a slightly different colour as the European subspecies. It would also be possible that the African aurochs had a longer dewlap, since bovids in tropical or subtropical climates tend to have longer dewlaps for display and thermoregulations, while those in more temperate climates have furry ornaments like beards or manes instead.

I actually made a drawing of an African aurochs bull and cow, but that did not work out as well as I wished. So I took the photo manipulation of the Taurus bull Londo and painted horns that shows what I imagine an aurochs bull to look like, and painted a saddle and light forelocks as we see them in many Iberian bulls. I also gave it the light forelocks that often correlate with bulls having a saddle, probably as a result of reduced sexual dichromatism, although there is no direct evidence for it. Then I inserted it in a semi-desert landscape from the Mojave desert (I know, wrong continent; I had to remove a lot of Joshua trees. It is just a symbolic background) using a photo from Wikimedia Commons by Alen Istokovic. I am pretty happy with the result. Please do not use without permission. 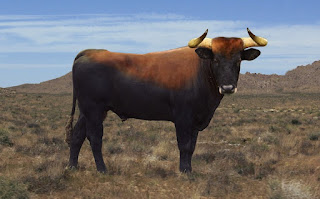 “Breeding-back” the looks of the African aurochs?

A “breeding-back” project for the African subspecies is tempting. While it seems likely that many of the Iberian breeds are influenced from African domestic cattle, there is no solid proof yet that any cattle directly descend from wild African aurochs, which disappeared in antiquity. EDIT: Decker et al. 2014 (go here) find African taurine cattle to be the most divergent taurine cattle and therefore speculate that this was caused by introgression of B. p. africanus. The portion of African aurochs ancestry in African taurine cattle might be as high as 26%, although they do not have African aurochs aDNA to prove that directly (as far as I understand). However, I don’t consider it that dramatic, as the European and African subspecies probably were more or less closely related. A “breeding-back” project for the traits of the African subspecies would have to focus on the same objectives as those for B. p. primigenius, with the exception that colour saddles in bulls are appreciated and should be bred for. Lowering the mean degree of eumelanisation for bulls will probably result in some bulls displaying a reddish brown cow colour scheme (like this Pajuna, for example), just as bulls with a colour saddle are not uncommon in the projects focusing on the European traits.
A possible set of breeds to optically restore the North African subspecies could be:
- Maronesa (horn shape)
- Alistana-Sanabresa (similar to Sayaguesa but less eumelanised, bulls have a saddle)
- Pajuna (slender and many bulls have a saddle)
- Watussi (horn size, used only with caution)
- Maltese/Chianina (size, proportions, body shape)

All those breeds are from a more or less subtropical climate, so they should be suited to the North African ecosystems, especially Watussi. As for the use of Maltese vs. Chianina, it would depend on whether semen of Maltese bulls would be available (to avoid the annoying dilution genes of Chianina), if not, one would have to rely on Chianina. The African aurochs was probably not as large as Northern European aurochs, but one has to compensate the comparably small size of breeds like Pajuna or Maronesa. And you achieve good proportions and body shape with those large breeds.

Such a look-alike for the African aurochs that is suited to the local ecosystems could be reintroduced somewhere in North Africa along other megafauna. I suggest a “North African Kruger National park” just like I did it for Europe, inhabited by megafaunal species such as African elephants, rhinos, hartebeest, red deer, cattle, brown bears, wolves and others. However, the political situation in the North African states makes it unfortunately very unlikely that a megafaunal reserve of that kind will be realized in the near future.