One might wonder why this breed is particularly interesting so that it deserves an own post, except that its name sounds like a beer. Well, it is interesting mainly for two reasons. First, its colour scheme considering it is a rather derived Central European breed. Secondly, it was a more or less important founding breed of Heck cattle.

Murnau-Werdenfelser is of Bavarian-Austrian origin, descending from Gelbvieh, Braunvieh and other local breeds according to Wikipedia. Gelbvieh are, as their name suggests, rather light in colour – particularly, eumelanin is lacking. Braunvieh and other breeds might have contributed alleles producing more eumelanin. In any case, Murnau-Werdenfelser have the right colour scheme besides the Gelbvieh-like diluted ones. However, sexual dichromatism is reduced and variable. Some bulls are completely black in an aurochs-like manner, others show the colour of the cows. Most bulls seem to be somewhere in between.

I do not know to which extent this breed was used in Heinz Heck's experiment as the literature is not precise. Cis van Vuure (2005) writes: "Heinz also used Werdenfelser cattle in his experiments, but Heinz himself makes no mention of this". He might have overlooked a remark from Heinz Hecks extensive article "Der neue Auerochse" ["The new aurochs"] published in 1980 in the international Heck cattle herd book stating: "For that I crossed Hungarian Steppe cattle, Scottish Highland cattle, Allgäuer, Werdenfelser, Angler, further also blackpied Lowland and Upland cattle, Podolian Steppe cattle and Corsican mountain cattle" (translated from German). However, he still gives no precise information to which extent the breed was used (in how many crossbred individuals, for example).

Nevertheless many Heck cattle still bear a striking resemblance to individuals of this breed. I give some examples now that I found on google that could easily be mistaken for Heck cattle (in some cases especially if they had larger horns, but there are also many small-horned Heck cattle): 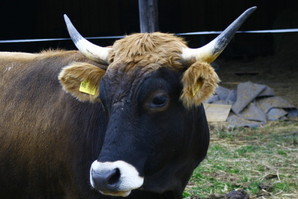 Heck cattle is often regarded or claimed as a mix of "exotic" breeds such as the Spanish fighting bull (which is very likely not the case) and others. A closer look at Heck cattle's breeding history shows that actually Heck cattle also descends from a number of Central European breeds that left a clear mark in its phenotype, as the example with the Murnau-Werdenfelser shows.