A second gene pool for the British primitive horse

UPDATE: I fear that the concept of a "British primitive horse" is outdated and not well-supported by evidence. See here.

The Exmoor pony is the only remaining pure member of what I like to call the British primitive horse, a native type feral horses that once probably was present on a large part of Great Britain whose historic records date back at least to the 850s AD and that evidently forms the ancestral base of all native British landraces (see here).[1] I still have not figured out how the Exmoor-colour (dark brown without dun) fits the puzzle of what the European wild horse actually looks like (this question is more complex than “breed A vs B” like it is approached by some people), but nevertheless the Exmoor/British primitive horse is a very precious breed and its nature should be preserved. Why? Because that population is the oldest feral horse population that still exists – although the majority of the Exmoor horses lives a domestic life today, they still have their instincts for surviving in the wild even among predators and necessary physical adaptions. And of course, beside their feral ancestry and their ecologic capacities, their phenotype is very primitive as well: small, stocky body, strong legs, large thick head, short frizzy mane and bushy tail; whether or not their lack of dun fits the European wild horse.
Unfortunately, the feral population at Exmoor went through several bottlenecks during the late 19th and early 20th century, but the most severe one was during the Second World War. The numbers dropped down to 50, only 7 of them being stallions (of which one was a crossbred with a thoroughbred). [1] As a result, the genetic diversity of the breed is not very large and the breed tends to be prone to getting horse mange, at least on the mainland.[2] With 800 Exmoor ponies worldwide, the breed is not very numerous as well.

Therefore I came up with an idea how to get more quantity and genetic diversity into the remnant stock of the British primitive horse by some kind of breeding-back or effigy breeding. The basic idea is to collect Exmoor-like horses from numerous less-derived British landraces and to purge out the domestic influence brought in by derived horses from the mainland by selecting them on phenotype and hardiness. Interestingly, there is something similar for the seriously inbred Sorraia, where mustangs (predominantly Kiger) displaying an identical phenotype are bred into the population to gain more genetic diversity. I don’t propagate that the new British primitive horse breed should be crossed into the Exmoor population right from the beginning, but if it turns out to be as stable and as original as the Exmoor, merging the two populations together in the future could in my opinion be considered.

When the British primitive ponies where increasingly used for agricultural purposes instead of left free for being hunted, they were crossed and selected for certain purposes. Particularly horses from the Iberian peninsular played a role in this, as you can see in breeds like the Connemara. Many of the so-called mountain and moorland ponies that have a native British ancestry luckily have very wide selection criteria, leading to a great variability that allowed the persistence of original features within them. Human migrations spread the Exmoor-type horses outside Great Britain; on Iceland, they constituted the base of the Icelandic pony (obviously many horses contributed to that breed); it is also the ancestral type of the Faroe pony. They even left a track in Scandinavian horses. Genetic studies showed that British and Scandinavian horses have genetic similarities that endorse their common ancestry, forming a “north pony group”.[2] In the south, the Exmoor evidently influenced some Iberian breeds, such as the Pottoka,[3] maybe also others. I am not sure if the inclusion of such Iberian breeds in such a breeding program would be wise because they might be less cold-adapted (unless they regularly live on high latitudes).

The Dartmoor Pony ranges free in large numbers in the Dartmoor National Park. It was, just like the Exmoor, another remnant population of the BPH before constant releasing of derived breeds into the moor brought in a lot of domestic features, many Dartmoor ponies do not look primitive anymore, they are actually a rampant cross population. However, there still are some very Exmoor-like individuals in the breed, and they live under the same circumstances as the free-ranging Exmoors. 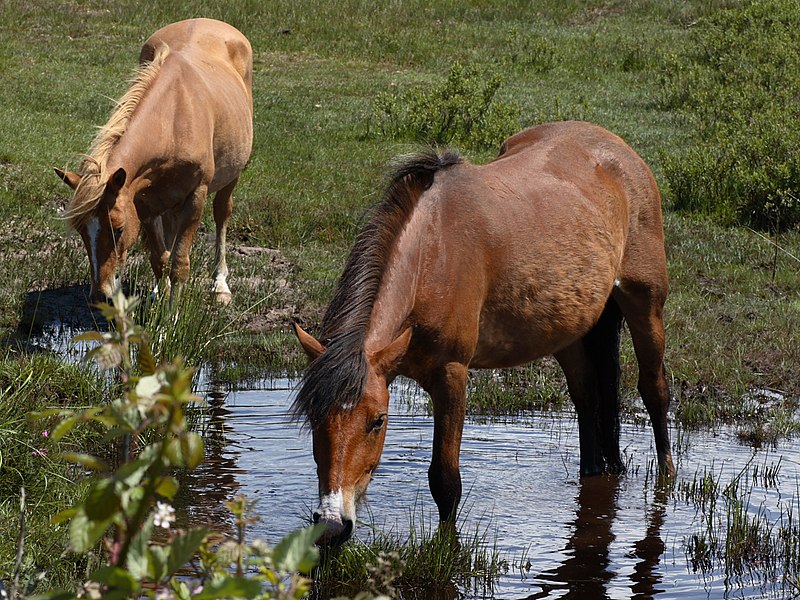 The New forest Pony has a similar history as the Dartmoor, but the Exmoor-like animals are more common and more “complete”.

The Fell Pony is a descendant of the extinct Galloway Pony, which also resembled the Exmoor closely. It has a black (for black in such a program, read on) or dark brown colour, and some have a useful body conformation. 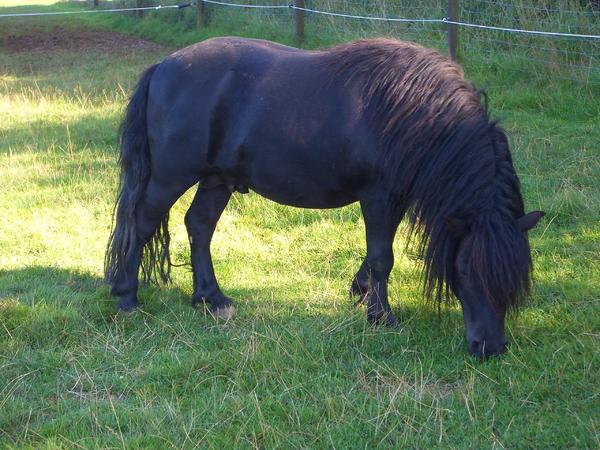 The Shetland is the smallest and stockiest breed in this selection, which is good because the light frame of some of the other breeds needs to be compensated. Some Shetlands have a good colour.

The Welsh is more gracile and more derived than the other breeds here, but some of them still have a good colour and a short mane.

The Highland Pony is very variable, it has individuals with a small stocky body and the right colour.

The Icelandic Pony is a breed displaying many different colours, including bay, dark brown and black (there are even black dun individuals, but those are not interesting for a program for the British primitive horse). Some Icelandic ponies are optically almost identical to the Exmoor. 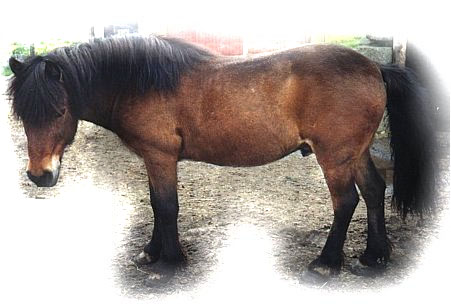 The Faroe was taken to the islands between the 7th and 9th century, and some of them also display a phenotype meeting all criteria desired. Counting only about 50 individuals in number, they are extremely rare.

The Gotland has several lineages, including small and stocky ones that are virtually identical to the Exmoor on the looks.

The Dale Pony has some very nicely coloured dark brown and black individuals with the right body conformation.

This Irish breed has, as you see, some very useful individuals as well.

To get a genetic diversity as high as possible, as many suited breeds as available should be used. I, personally, would include all those breeds. This increases the unwanted traits of course, but that could be counteracted by keeping a careful eye on the founding individuals and the herds they are from. Especially the stallions should be of high quality. Another question is how large the founding population should be to create a large and diverse gene pool. If between five and ten individuals of each of these 11 breeds are chosen, 55 between 110 individuals would form the base of the population. If that is feasible would depend on the financial capacity of the program of course, but I’m just thinking about a theoretical guideline here. A breeding book should be set up right from the beginning to not repeat the mistakes the Heck brothers did with their cattle and horses we do not know today what cross animals these are actually based on.

The breeding criteria to consolidate the original phenotypic features of the British primitive horse in a kind of “Exmoor Pony 2.0” should be:
I included the last point because it is known that horses living semi-feral do not easily loose their tameness what can provoke situations dangerous for horses and people.[2] I am confident that all of those 11 breeds I chose here are hardy and robust, but to further select on this trait cannot be a mistake. I think that this new breed does not have to be totally phenotypically identical to the Exmoor, f.e. some variation regarding the skull shape could be permitted if it increases its primitiveness (as I explained in the previous post, the Exmoor has domestic skull features such as enlarged eyes and a shortened snout). Now let me explain why I would permit black colour in this population if it is obviously not present in the modern Exmoor. Actually, black horses seemingly always were present within the Exmoor/British primitive horse; they were reported as recently as the 19th century, but the bottleneck events purged them out of the modern population.[1] Black colour is not only a colour of the original Exmoor, but also one of the two basic wild type colours in horses (among bay, which probably was more common based on genetic evidence) [4,5] and it is very useful for camouflage. So this colour should be reintroduced in any case if such a project to re-unite the original features of the British primitive horse is ever to become put into practise.

I already contacted Mr. David Brewer, Chairman of the Exmoor Pony Society, regarding my idea, and he told me that my idea was already looked into and that they keep a careful watch on the blood lines of the Exmoor with the aid of genetic testing, I guess to avoid too much inbreeding.