The Pleistocene Wild horse skeleton from Denmark displayed at Kopenhagen is perhaps the only complete specimen of Equus ferus from that epoch that is available on the web. I always suspected that it was a member of the przewalskii subspecies that far more widespread during the Würm glacial and also present in Europe, as cave paintings show. However, on sorraia.org there is the claim that this skeleton is practically identical to that of a Sorraia. In the lack of a complete Sorraia skeleton to compare with, we have to take the other way to verify this statement and do an anatomically correct reconstruction of the skeleton and compare both animals in flesh. This is less precise than working with the skeletons, but better than nothing. Note that the skeleton is mounted incorrectly, like most museum mounts (the post of the legs is unnatural, the neck should have an S-curvature). This how the animal should roughly look like in life:


I chose a bay dun colour because this is seemingly the most common wild type colour of Equus ferus, and there is no genetic evidence for black dun during the glacial yet. I restored it with a standing mane because it seemed advantageous to me in a dry environment. But a falling mane is possible as well, as it is a good protection from heat loss and snow, and mummified Pleistocene horses from Siberia show a falling mane as well. In this case, it probably would be a member of the ferus subspecies. The snout in this reconstruction probably is a bit too long, you see the more precise head reconstruction of the specimen here. 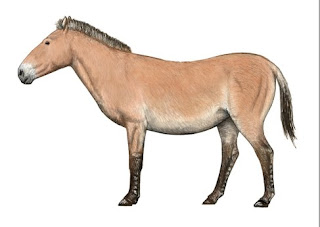 After doing the reconstruction, I superimposed three primitive horse breeds over the image to get an idea of which body conformation comes closer to this wild horse. These three breeds I chose are a Przewalski-influenced Heck horse, an Exmoor, and a Sorraia-type Kiger mustang.

The trunk length is the benchmark. The Heck horse and the reconstructed wild horse have almost no proportional differences (if you think the Heck horse has a shorter neck, keep in mind that it has its neck in a more upright position), but the head is slightly shorter. The Exmoor pony has legs shorter by about 7%, but apart from that, the proportions are similar. Again, the snout is shorter. The Kiger Mustang, which's phenotype is identical to that of a Sorraia, has legs longer than those of the wild horse by about 9%. The neck and skull might be slightly longer as well, but this is not measurable because the animal does show them in a lateral position.
But metric proportions are not the only important aspect of the body conformation. All historic wild horses are described having strong legs, and primitive ponies like the Exmoor and kin or the Konik do so as well. I reconstructed the thickness of the legs with the aid of this superb drawing of a Przewalski's horse: 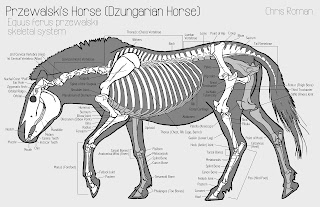 As you see, the lim bones of this Przewalski's horse are about as thick/slender as in the fossil horse, therefore I made the legs in my reconstruction as robust. Of the living horses I compared it with, the Heck horse comes closer regarding the thickness of the legs. The Exmoor's are a bit thinner, and those of the Sorraia-type Mustang are way thinner.

Mind that this comparison is, enforcedly, based on a very small sample - just one skeleton, and pleistocene Equus ferus seemingly were quite variable. Furthermore, horses from that epoch probably are not a prime comparison for what European wild horses would look like if they hadn't been exterminated by man. The increased forestation during the Holocene might have caused a change in body conformation, probably leading to a smaller and stockier type - but as I always say, trustable osteologic data is needed.
But what I can say based on that comparison is that the skeleton of this Pleistocene wild horse is very likely not identical to that of a Sorraia.