In my previous post on the Sorraia, I claimed that these horses are slim-jawed. To either verify or justify this statement, I did a life reconstruction of the skull of the wild horse skeleton found in Denmark, using this excellent anatomic drawing as reference. I then superimposed it with the heads of two Sorraia (first head ©Lynne Gerard, second head from Wikipedia commons). This is the result:

They do not match completely, and it is difficult to decide which parameters to take as anchors, such as the snout length or the depth of the postorbital head etc. To get a more precise idea I then decided to do it the other way round by taking photos of Sorraia heads and trying to infer what the skull of this animal must look like. This is quite easy when having good anatomical guidelines. I chose the photos of four individuals; two which appeared to be on the robust side, and two which looked gracile to me. This is a small sample but considering that the Sorraia is seriously inbreed, it might be sufficient.

As a comparison, I used the Denmark skull again, additionally to a skull of E. lambei in the lack of Holocene wild horse skulls. The two “Tarpan” skulls are useless as they most likely represent feral or mixed horses. I added the skull of an Exmoor pony which I scanned from a Sue Baker’s book (The Exmoor Pony: Survival of the fittest) and the derived domestic skull (I have no clue which breed it might represent, but its shape is obviously very different from wild Equus ferus).
To compare how deep, short or pinned the skulls are and how weak or deep the lower jaw is, I related several arithmetic features of the skull against each other. I measured the length from the tip of the upper incisors and the Squama occipitalis ("length/depth"), the relative depth of the lower jaw by measuring the depth of the snout at half of its length (lower jaw and upper teeth not included) and the depth of the lower jaw (teeth excluded). The "pinned ratio" is my attempt to quantify how conical/pinned the skulls are by relating the depth of the skull at where the nasal bone ends and at the end of the jaw bone. 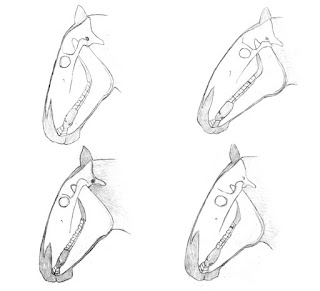 So, to prove whether the skull of the Sorraia resembles that of Holocene wild horses from Iberia or not, a sample as large as possible of such skulls of the local predomestic horses has to be collected and compared on osteometric basis. Actually that should be done with the whole body.
Posted by Daniel Foidl at 10:29